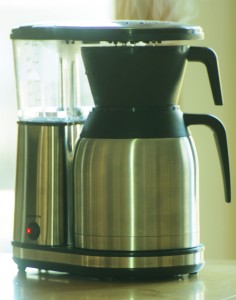 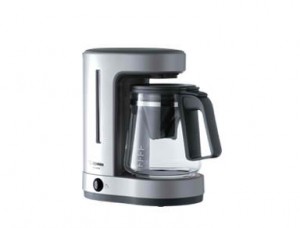 The Zojurushi 5-cup coffeemaker attracted my attention at a previous International Housewares show. I’d been trying to find a successor to the legendary Kitchen Aid 4-cup. Could this be it? My appetite was whetted when I ran into it again at Oren’s Daily Roast. I practically begged him to let me try it, but I’m already into him for so much coffee, he put me off. Finally I got the courage to scarf one from their sales rep at this year’s Housewares show. I was pretty excited to see it. It has the second most important virtue of any coffee gear, good looks.

The 5-cups are to me really four, but that’s what I’m looking for.

Number one, though, can it brew great coffee?

I finally scarfed one off Zojurushi’s PR people who I met at the International Housewares Show. One showed up on my doorstep a few days later.

It uses a number 2 Melitta filter. It has a removable water chamber and an inline charcoal filter. I was surprised that the filter appears to be located after the water is heated. As I use mostly low-mineral no-chlorine water I hardly need such a filter. No mention is made in the instruction book as to where to buy replacements.

Using the Zojurushi is easy. Fill the water tank up to the line. The instruction book may be light on the water filter replacement but it is excellent about its suggested formula, specifying 35 grams of fine grind coffee for a full pot. That works out to the industry formula. This might not seem astounding but recipes are almost never mentioned in coffeemaker instruction manuals, and when they are, they are usually wrong.

Monitoring the brew temperature showed me what I wanted to see. It really gets hot, not quite as instant on as the Technivorm, but very close, 200 degrees Fahrenheit for most of the brew cycle, even a little above towards the end. Best of all, the water gets all the grounds nicely wet. It’s a little appreciated fact that the biggest advantage manual drip has over auto drip is your hand always knows where to pour hot water. I found the best way to ensure this is to remove the top during brewing; I presume this is because the lid must be located precisely, but it’s easy to try it once and see if you agree. With minimal futzing, this coffeemaker just works almost perfectly.

Result? After years of searching I’m done. The Zojurushi does a stellar job, almost the equal of the Technivorm in temperature and actually, gasp, a little better in its drip performance. You almost can’t do better yourself.

Recommendation? Place 35 grams fine grind coffee for a full pot. Flip it on and in seven minutes, you’re ready to enjoy. Seven minutes may seem overlong to American drip aficionados, but trust me you will like the coffee. I ascribe the slightly longer contact time to Japanese fascination with European standards (I’m half-kidding) and the fact that during the first minute the water is just under ideal brewing temperature.

I brewed several batches of Bridgeport Coffee Company’s El Salvador Finca Las Nubes – Ernesto Lima. They charge for heirloom bourbon coffee grown by the kind of farmer who walks around dusting his plants every afternoon and, using this brewer, I could taste it. I then brewed some very different Oren’s Daily Roast Viennese Blend, which is make up of two stellar Colombian coffees, one light and the other French roast. It’s my favorite summer after-dinner coffee. I get a lot of local produce during the summer months and this coffee is able to add to a meal already chock with rich flavors. This brewer actually made coffee virtually identical to what I could do with a Hario V60, no mean feat.

This review has a simple ending: Zojurushi is top rated, the current five cup champ.