This year’s International Housewares Show in Chicago had some exciting news. OXO has introduced a new manual drip coffee brewing system. As usual with OXO, the benefits are in the details. It’s a system, meaning it has attention to aspects of boiling water, of brewing and serving. I couldn’t get them to give me a sample, but I’ll be happy to review it. Based upon a few quick taste samples, it has what it takes. A few features: 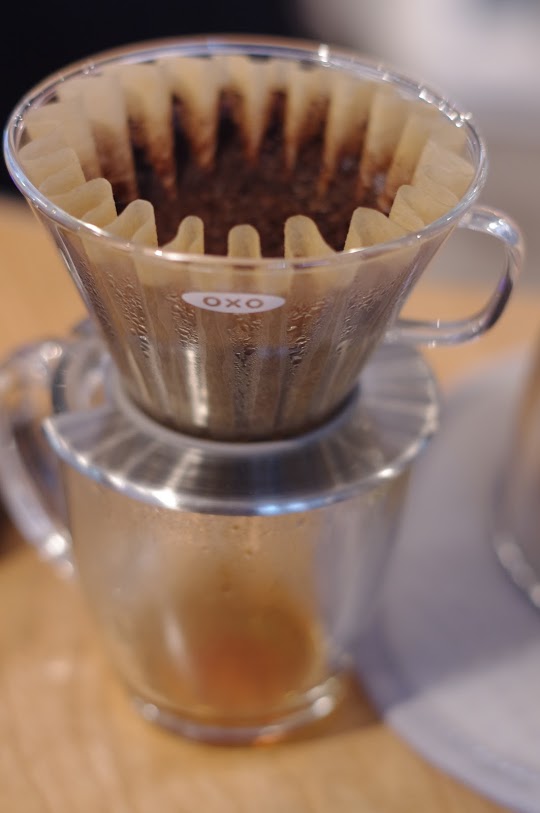 Attention to balance. OXO has this down. The idea of making sure it’s easy to handle and perform all tasks. 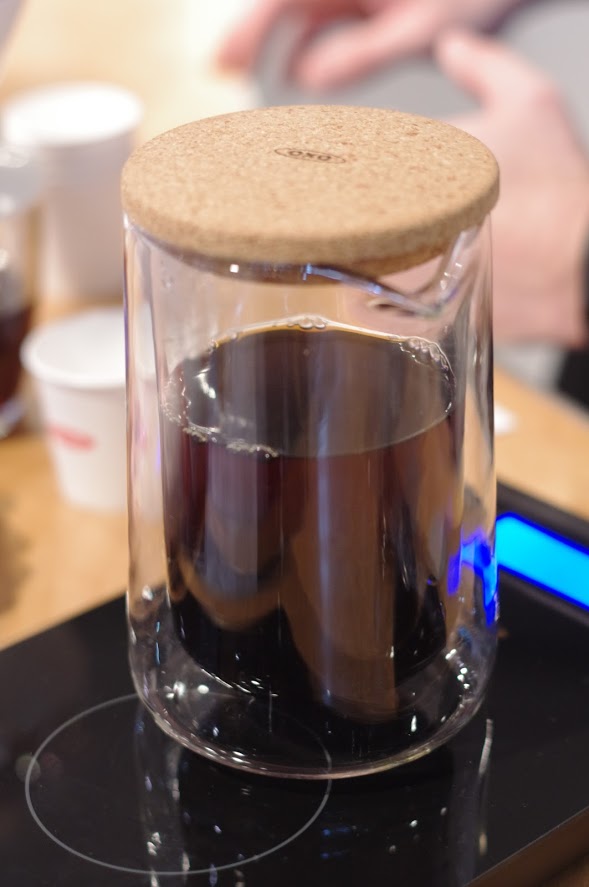 It’s interesting to see OXO moving towards manual gear. It gives me hope that there’s life in new manual methods. While this may be refinement more than reinvention, I can think of no more thoughtful minds than OXO’s folks to apply themselves to getting more from your precious grounds. I’ve requested a review sample and am eager to see how it fares in my own kitchen. Meanwhile, enjoy this conversation I had at OXO’s space at Housewares. 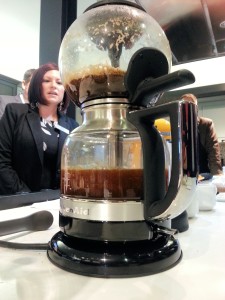 I keep saying that if you don’t get into coffeemakers, your coffee at home will never be great. The best trade show for the gear isn’t a coffee show at all – it’s the International Housewares Show.

It’s where I discovered the Chemex, the Aeropress, KitchenAid’s legendary 4-cup, Bonavita, Technivorm and of course my first Bunn, the A10. Not bad for one event! They don’t really want consumers here. I get to go because I keep writing this blog and various articles. Even I used to get ignored because the sellers are always on the lookout for Macy’s buyers. Can’t blame them. I ask a hundred questions and might buy one, where department store buyers are going to buy a case for each store. It keeps me humble.

This year’s event had several new, innovative products. Let me give you a quick (by my standards) rundown. None are reviews. I sometimes look back at first-tastes and see them for the infatuations they are. I believe in long courtships regarding coffeemaker testing. 30 days is the minimum, and it reduces/eliminates new car smell, packaging, and gives me time to do old fashioned things like read the instruction book and tweak products a bit before shooting off my pen, figuratively speaking of course. 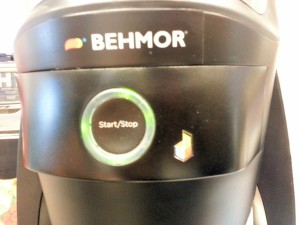 Behmor won the Innovation Award, Kitchen Electrics, International Housewares show award for Joe Behm’s Brazen Connected 8 Cup Brew System. I was perhaps the first to review the Behmor Brazen, so you already know its leading edge position among brewers for its variable temperature setting, variable pre-infusion times (you can actually brew same-day roasted coffee without foaming overflows!) and altitude settings, which likely mean nothing to New Yorkers or Chicagoans, but are the only way to achieve SCAA-recommended brewing temperatures in Denver. Joe won his award (which kept him from showing up at CoffeeCon NYC) for the brand-new “connected” version of his brewer.

With the Behmor Connected you will be able to go online and download Counter Culture’s (or other roaster’s) recommended settings for his brewer. This means even more. I can envision barista champs blogging their favorite recipes and settings for coffees ala celebrity chefs (that they really are of course) and finally being able to achieve at home exactly what they are doing in the cafes. Meanwhile, it should double Behmor’s market because more casual consumers who just care about taste, not geeky tweaking, and give them easy downloads to load.

An interesting new startup is Brewista, the brainchild of Bonavita co-owner and inventor, Brian Gross. Brian is one of the great minds of coffee brewing. He talks faster than anyone I’ve ever known, and it’s all content. He’s establishing a coffee product innovation think tank, and future manufacturing site in Cheyenne, Wyoming! He’s releasing a line of simplified Bonavita products that will feature fewer features, and lower costs to bring things like their kettles to a wider audience. Brian is working on online interconnectivity with coffeemakers, which means more sophisticated brewing and simplified operation for sleeping early-morning operators. The thing that he was most excited about was his onsite coffee shop almond milk extractors for cafes. Of course, a home version cannot be far behind. Keep an eye on Brewista. Brian has a great track record with Bonavita, and among coffee’s best overactive imaginations. 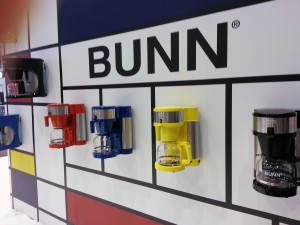 Bunn had a wall of colorful brewers. At first I thought they’d kidnapped an Italian designer and brought them to Springfield, but it turns out they were only for display. They did have their home Trifecta on hand. I can’t help continuing to believe they should sell those in a Bose-style direct program (the pricing/profit margins are too low for mainstream retailers, even so-called high end ones like Sur La Table or Williams-Sonoma). A Connected Trifecta has to be in the works, but if it is, they’re keeping mum about it. Hope they walked the show.

Bunn still makes the best tasting K-cup machine I’ve yet tried. It hits the 196°F mark easily, and, used in tea (pulse) mode, does a very nice cup. iCoffee is my single nod to K-cups. I lost interest in Keurig after they released the 2.0. It has the faults of the first generation, and some new bad habits like the locking mechanism that forces you to use mediocre coffees. Too bad too, because there are some good local roasters churning out fresher, higher quality K-cups. The Keurig 2.0 is not a bad machine, in fact it is amazing for what it does, but it was designed to expand its use for many beverages, soups etcetera. It makes good (not great) coffee.

iCoffee, brainchild of Bruce Burrows, who purchased the old Remington name (they used to be a high quality coffeemaker brand). The iCoffee does extract more thoroughly than Keurig’s or most other K-cup machines. And it uses any K-cup, just as Bunn’s does, so there’s no problem filling it with the really good ones coming out. Who’s got good K-Cups? La Minita’s own brand of K-Cups, made with proprietary filters made from surgical fabric and recyclable after peeling foil, are the best I’ve yet tried. I know K-Cups are under ecological and sensory fire, but they are market reality and, as Mc Alpin and Boyd’s have proven, can be made recyclable.

KitchenAid hosted a little reviewer party one morning at their nearby (it’s not that near) showroom. I was just wowed when KA Product Development Manager Meighan McLaughlin started brewing for me with their new Siphon (vacuum) coffee maker. It has automatic cycle, a permanent filter, and has a glass top, yet features steel reinforcement at the traditionally weak points. KitchenAid also has a new grinder, with claimed burr refinement. There’s even a new KitchenAid French press which operates on AA batteries. 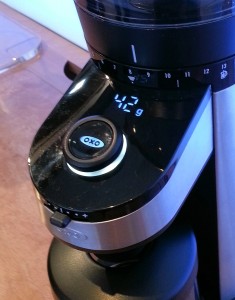 I’ve saved Oxo for last. Oxo makes a lot of rubber-sided kitchen hand tools. I have their can opener, and nothing else, but it works well. So what are they doing in the coffeemaker business? Apparently, according to their charming French Senior Product Manger, Claire Ashley, they decided to enter the coffeemaking market after analyzing the current one and realizing how mediocre most coffeemakers are. Obviously, CoffeeCompanion fans know this, and also know I simply ignore most of the ones that can’t extract properly, but having searched last year for my Consumer’s Digest report, I can say that likely 80% of the ones in mainstream department stores are genetic failures in the kitchen.

Oxo first showed me their grinder; that they showed me the grinder first is a good sign. It has a built-in scale and automatic shutoff by weight. The upper beans bin is removable and sealable. If it grinds properly, (only testing can determine this) they might really have a powerful entry. They are introducing two coffeemakers. First, the 1 liter one has a glass tube so water at its hottest never touches plastic (although the grounds holder is BPA-free plastic). They have also developed algorithmic internal software that allows you to do various batch sizes and still deliver the same grounds/water contact time. This results in consistent tasting brew, whether you make two cups or eight. If it works as promised, it’s a great feature.

The second model offers a larger 12 – 4.5 oz cup batch size. According to Ms Ashley, Oxo designers recognized the heating limitations creating enough pumped hot water to do this, which she says is impossible with current technology. So, they are heating all the water at once, and then release it at approved brewing temperature. Both brewers feature tubes to release brew at carafe bottom in order to mix coffee before pouring. An unusual innovation is a transformer feature where you can remove the boiler and use it as a water kettle. Exciting!

As Sherlock Holmes, and later Carly Simon, say: These are the good old days!