What I Really Think of K-Cups 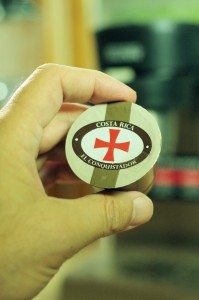 Recently, I reviewed every brewing format in the U.S. I freely admit I was previously strongly biased against pods in general and specifically the K-Cup, the number one pod format. My reasons weren’t simple connoisseur snobbery, but cool analysis based upon the following industry givens:

Oh, and don’t forget this one:

With me so far? Good. Now, a few things happened since then to open my mind to at least the possibility that K-Cups might be a viable format. First, there is the Bunn My Café machine. In my tests this one machine was heads above the others in its ability to extract coffee. Keep in mind that for years Bunn has specialized in three-minute extraction through its almost-power-washing sprayhead design in traditional drip machines. The My Café gets the water up to industry-standard temperature heights and somehow (I’m not yet able to see into the brewing chamber) this results in a much better-than-average cup.

Second, the K-Cup patent expired. This means machinery entrepreneurs will be exploiting the format, perhaps even beyond what Bunn’s done (Bunn’s was developed through licensing prior to the expiration). The patent’s lapse also means a wider variety of coffee brands will be free to flood the market with K-Cups.

Third, new smaller-run K-Cup packaging machines have emerged to make it cost-effective for local roasters to make their own K-Cups. This has caused a virtual explosion. While some specialty roasters are still keeping their distance, several have announced top quality coffees in K-Cups to the general public.  This brings us the likelihood of neighborhood, fresh coffee.

Last but not least, there are new in-cup technologies. In some ways these are the hardest to understand, much less describe. Boyd Coffee introduced a new K-Cup of their own design at the 2014 SCAA Conference. Even with all the coffee samples I’d had that day, the Boyd’s design was night and day better than I’d previously tasted. Boyd’s has a new type of bottom to its pod that is closer to a traditional filter. While it seems like it would undermine the already-short contact time between hot water and ground coffee, it clearly resulted in a more thorough extraction. 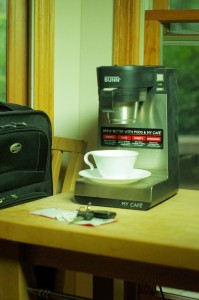 This travel photo shows why this pods are important to good coffee.

I finally tasted close to coffee nirvana later at that same event when I had a La Minita K-Cup. This design, as explained by CEO Bill McAlpin, utilizes material obtained from the surgical profession that is both slow to release but allows greater transfer of flavor oils, thus coming closest yet to what the industry calls “Gold Cup” standards.

I realize McAlpin’s coffees are already pinnacle specialty coffees that score in the 90s among coffee reviewers, but this cup truly floored me. McAlpin, more than anyone else I’ve met, convinced me he truly understands the entire process. His K-Cup’s design takes full advantage of every second of contact time inside the K-Cup (something under one minute!) and then that special material at the K-Cup’s bottom makes sure the coffee essence exits the cup in its full glory and into your cup.

McAlpin claims he’s done blind tests among the top roasters and they are unable to distinguish between their roasts brewed using a traditional drip brewer versus the same coffee prepackaged in his K-Cups! I can only underscore that I believe this might be possible using this technology and a top quality K-Cup brewer!!!

I’m sure that some jaws will drop after reading this last paragraph and my having written it. My position is I try very hard to be a coffee objectivist in what surely must be understood to be a largely subjectivist world.

I am certainly not urging anyone to discard their Chemex, Hario or French press makers for K-Cups, nor for that matter their Technivorm, Bonavita or Behmor traditional automatic drip machines. What I am suggesting is to consider what this offers in terms of consumer choices and the possibility of getting a good-to-near-great cup of coffee fully automatically and conveniently. Even I must have an option for those times in my life where the process is not the goal, but a necessity of my real goal: getting a savory cup of coffee. Such times are quick morning starts, mornings when I am heading to an airport for an early flight. Sometimes a friend drops by and we want to share the coffee, but not the time it takes to make it the manual multiple step way.

Let’s remain open minded. Let’s also retain a healthy dose of skepticism. I am simply declaring that it’s now been proven to me that it IS possible to get a very good cup of coffee with a pod machine. Once it is POSSIBLE, it’s just a question of determining how it was done, then doing it that way. Remember, The Coffee Companion’s mission is great coffee, not labor, nor for that matter technology. Stay tuned!