I spoke of my best cup of the Coffee Fest 2011 Show as a Sumatra coffee slow brewed for me at the Counter Culture exhibit. My best coffee from Coffee Fest was the Backpacker’s Blend given me in the hall by a small-batch roaster, Kalamazoo Coffee Company from, where else, Kalamazoo, Michigan. He appeared to have just two packages of it, so it seemed all the more precious when he offered one of them to me. I came home and opened the sack to take a whiff – too dark roast, I thought. I didn’t even brew any that day. 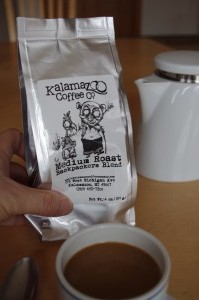 The next day lunchtime rolled around. I often brew something slightly darker roasted for my afternoon coffee. I chose to use the Sowden SoftBrew, which steeps the coffee. For reasons thus far unexplained by science, there’s a significant difference between steep method brewers and highly agitated drip or vacuum methods. I’ve heard plenty of conjecture, but no solid facts. Let’s just say they’re different.

To brew using this method, I decided to emulate the formula used by Peet’s Jim Reynolds in his French press tutorial in my Coffee Brewing Secrets DVD. Jim used a rather robust grounds-to-water ratio: 57grams for four six-ounce cups. Of course, I ground coarse, as coarse as my Preciso grinder would allow. I preheated the SoftBrew inside and out so that when the water was poured in to mix with the grounds it would not be suddenly cooled by unheated porcelain or the filter’s cold steel. I heated the water to a full boil, and started a stopwatch. One minute from the boil, I poured enough water over the grounds, just as Jim did. After another minute, I poured the rest of the water into the SoftBrew. I covered it and timed the entire time from the first water was place in contact with the grounds until I poured the coffee, four minutes. 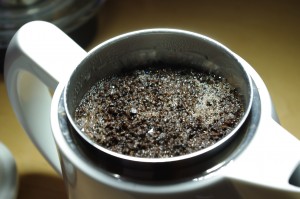 Often I find steeped methods have paradoxically harsh flavor, which I believe comes from people pouring still-boiling water over the grounds. I say paradoxically because the brew often tastes underdone, indicating the water has cooled too rapidly. All steep methods are going to experience heat-loss during brewing, but the act of pre-warming the pot would seem to circumvent at least some of the initial temperature drop.

Just before I poured the coffee brewed in the SoftBrew I gave the whole mixture inside a stir. I did this because the grounds can’t help but move towards the top of the brewer during soaking. This means the coffee towards the top is going to be stronger than that at the bottom. I want everyone to enjoy the same brew strength in their cup. The stirring does increase the likelihood of fine grounds in the coffee, but I think it’s a small price to pay as well as a small increase in fines.

The coffee was perfect. The roast was definitely towards the dark side, but minus any perception of bitterness or burnt caramel that dominates so many darker roast coffees. There was still a healthy brightness of acidity in each taste. This was a coffee that would stand up to cream nicely, but I enjoyed it just as it was.

My thanks and compliments to Kalamazoo Coffee Company. It was indeed my best cup after the show.