The Chemex is both a coffee brewer and an artwork. Few coffee brewers have the ability to show to an audience like this brewer. It’s even earned a place at the Smithsonian. It’s so delightful to look at that it’s easy to overlook that it’s a fine coffee brewer that offers a unique flavor profile.

The Chemex uses a thick laboratory-grade paper filter. If you try to use Melitta-style filters in a Chemex, the water will run through too quickly. The paper is part of the method. It asks as a flow regulator. The idea is to fill the Chemex with coarse ground coffee and let it soak as the thick paper slows the water’s movement through the coffee. In this way, it offers and almost-French press-like soaking to the grounds. But, most Chemex aficionados suggest tiny hot water pours, adding just enough to completely cover the grounds. 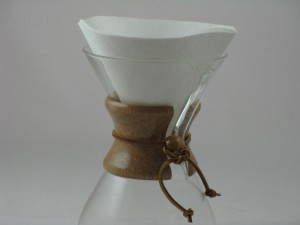 The thickest filter paper ever... let's you brew stronger, which surprises a lot of people.

I made coffee using very coarse grounds, identical to what I’d use in a French press or percolator. This is counterintuitive to drip making, but the thick paper demands it. If you grind too finely, the combination of paper density and grind will slow your drip rate so much, you’ll end up with very strong, bitter coffee, although there will be no sediment. I heated the water to boiling and then removed it. In about a minute the water was 200 degrees Fahrenheit. That’s a good temperature to pour into the Chemex. The Chemex inventor, Dr. Peter Schlumbohm, believed that most coffee brewers (especially the vacuum) brewed at too high a temperature. The Chemex is designed to brew at standard or below temperatures. While I got good results at up to 200F, I often preferred the coffee brewed at around 190, which is technically 5 degrees below industry standards. Let’s just say this: don’t pour the water in once it’s boiling; you won’t like the results.

The temperature curve reflects the gaps between pours. As you can see, it’s hard to determine the exact contact time between the water and the grounds. One reason for the distinctive flavor of the Chemex might be the wide temperature variance once the water is poured in, without any more hot water joining it until that amount has gone through the grounds. Another reason may be the coarse grounds. The thick paper filter is almost certainly a factor. While critics may claim the Chemex filter holds back important flavor oils, I would not agree without some evidence. The cup profile does not indicate anything less than a stellar cup of coffee. In fact, I think I can make stronger coffee with the Chemex with no bitterness at least partly due to its filter. If a wine-like viscosity is what you want in your cup, the Chemex is your brewer.

The Chemex works by trial and error. It is difficult to calculate the contact time, as you really have a number of contact times, due to the practice of pouring small amounts of hot water and allowing it to cycle through the filter bed before pouring in the next one. The best starting point it simply to use a coarse grind and not-too-hot water. 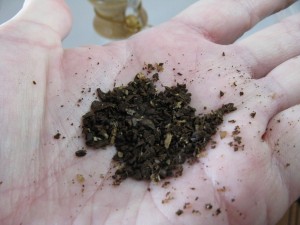 An interesting point how hot the succeeding pours are. Most manual drip users boil the water, then let it come off the boil and then pour it in without reheating it. As Oren Bloostein told me, he continuously keeps the water at near boiling. I’ve done it both ways, and am unconvinced that one way is inherently right versus the other. I suggest you try both and decide.

Cleanup is simpler with the Chemex than any other brewer I’ve used. You simply toss the paper away. If you compost, you toss the remove the grounds and toss the filter. The glass maker rinses easily — nothing to scrub.

The Chemex is the most attractive manual drip maker ever made. It is a manual drip maker, which means it’s more work to make the coffee. Even though I do, I can understand others claiming they don’t want to make manual coffee while getting ready in the morning. Its cleanup is so simple, and once you get your measurements and grind down, it’s really quite an easy brewer. The only thing left is how to keep the coffee warm. I suggest the cost is low enough that you buy two sizes and make the right amount for a half hour, and spring for the glass top that keeps the heat in.

I strongly recommend the Chemex brewer.