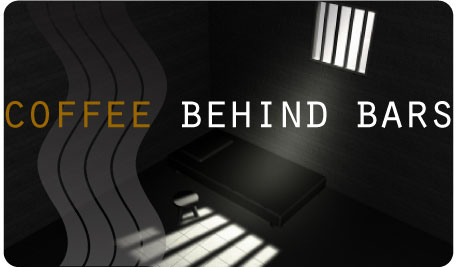 After spending years in search of the perfect cup of coffee, I must admit I’ve had quite a few that have come close enough to deserving to be, as the saying goes, “almost too good to be legal”. And upon that flimsy premise I became curious to try the coffee given society’s true illegals… the men and women who populate our flourishing and expanding prison system. How good or bad is it? It would seem that it should, along with hard beds, out-of-date newspapers and small-screen television, be a part of their punishment for disobeying the law in this, the greatest country on earth.

I’ve certainly had coffee that seems more of a punishment than a joy, here on the outside that is. The more I thought about this the more obsessed I became, until I began introducing myself to a few lawyers and judges at parties (I normally would be embarrassed by being seen with these types) with the hidden motive of obtaining passage into the coffee klatches within the prison system.

Finally, Sid Heller, my attorney of many years, who has come dangerously close to being imprisoned himself for so savagely representing me in court (Sid is a lot like a mad dog when he tears into yours opponent) called me late one night.

Sid: “I could be if this ever gets out. I’ve got you a visitors pass to three institutions, a city lockup, a county jail and a State penitentiary. What’s my Christmas present?”

That’s Sid. Effective and right to the point.

So, here I am writing this report on the way back from my tour of coffee al frisko. 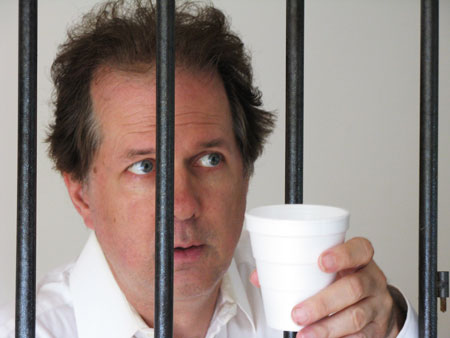 My first sip of city jail’s coffee said it all. In fact, this coffee reminded me of the song title, “Yesterday.” The worst thing about it to me is that the guards appear to be drinking it too. Now, I can almost understand some fellow who finds himself here awaiting trial having a few cups just to get through the boring courtroom tactics. After all, his lawyer has to stall the case along until everyone connected with it either dies, or can’t remember. But the guards??? Frankly, I expected better. By the way, I don’t suppose you can guess whose coffee they serve here? I’ll give you a clue. It’s mountain-grown. If I were ever here, I mean really here, I know I would use my one phone call to roaster John Martinez. “Hello, John. Kevin Sinnott here. Hey, do you suppose you could overnight some Jamaican Blue Mountain and maybe a French press? I’ll have to send you a check, John. Trust me.”

Oh yes, and there are insects here. Large ones.

I always promised my larger-than-life uncle, one Father John Dufficy, that I would never stoop so low as to cite the sensationalist drivel that is so prevalent in the newspapers. Nevertheless, I couldn’t help but think of Lindsay Lohan while I sat in cellblock 19B at the McHenry County Court lockup.

It was obvious that the experience was destined to be unpleasant. The foul smelling man in the next cell noticed my customary sport coat (I did wear a striped shirt) and insisted on calling me, “English” for the duration of my stay. The rest of his conversation held similar interest. I’ve never met a person who made more references to the sex act and seemed less likely to experience it, given his lack of charm and any form of social skill.

The guard posted for my ward (is it a ward?) asked me if he could get me anything such as cigarettes. I responded that I would like a cup of coffee, fresh if possible.

He gave me an odd look after that last comment, about the freshness. I was quietly glad that he did. It meant that he hadn’t guessed my true identity. My research, after all, was for naught, if the prison administration started slipping me special treatment in the form of better coffee. All I need is some savvy guard sending out to Dunkin’ Donuts in an attempt to fool me.

When my “host” returned he handed me the usual institutional styrofoam cup. Wedged alongside it was a packet of Sweet N’ Low, almost a guarantee of poor ingredients. How is it McDonalds is able to afford Equal and a big customer like the Prison system can’t?

I know you’re getting curious about the cup quality. Surprise. The coffee was… quite good. Aromatic. With a nice acid and medium body. The finish was the only place where the telltale signs of a less than stellar product was being used here.

Oh, I could definitely quibble about the formula. I have no doubt that they were employing the usual “one teaspoon per cup of coffee” for every cup. If I were to stay here for even one day, I would offer my recommendations that they “up” the grounds-to-water ratio.

Perhaps it was the overwhelming stench of the cell block, but even the Styrofoam cup seemed inoffensive. When I was released I noticed the coffee making station was equipped with last month’s top rated Bunn coffee maker and Yuban coffee. Someone around here must have taste buds.

Maybe they are subscribers after all.

State penitentiaries are both the best and worst of the penal system. There are the ultra-violet “Natural Born Killer” — types who probably can’t be trusted with any glass equipment for fear they will convert a broken carafe into a dangerous weapon. Then there are the so-called “country club” prisons filled with reckless stock brokers and tax evading Mafiosi, where I would half-expect commercial quality cappuccino makers, maybe even a Starbucks or Gloria Jeans franchise operating within the prison walls to serve these “high-flyers.”

The state penitentiary I visited boasts no such luxury. Even though I was allowed into only the minimum security areas, much of the coffee appeared to be instant. The guards here definitely keep to themselves. They do not share coffee or any other informalities with the prisoners. My rather limited contact with the other prisoners didn’t allow me to become “wise” to any sort of underground “specialty coffee” system such as exist for cigarettes, drugs and sex magazines. I did notice one Gavalia package on the window sill of an inmate. But for all I know, it was a birthday present from his aunt. I was unable to find its owner, who was probably in the gymnasium during my stay.

In case anyone’s interested, I discovered that prison terms — I guess I should say, prison phrases such as calling the guards “screws”, “guns”, “rods” or “heaters” and the other inmates, “buddy” or “pal” are apparently no longer in style. The first time I attempted to use any of these in passing conversation, a hearty round of laughter resulted. I apologized and covered my ignorance by claiming I had been transferred from an older prison community. The prisoners took it in stride, and told me I’d just seen too many Humphrey Bogart films.

Taster’s Choice: Not Much

There are basically three choices of state pen brews. First, there is the institutional coffee served at breakfast and dinner. Frankly, it tasted identical to what I’d been served on Amtrak. It had Nestles written all over it. The harsh assault on the tongue, the weak body and the sour aftertaste. I’m sure the urns they were using (verified by “Mel”, who works kitchen duty or mess, as he calls it). The second choice is to drink coffee from a vending machine. Here the coffee is probably technically worse than the stuff in the hall, but for some reason, it actually offered more in overall perception. I was unable to bring in any laboratory equipment to verify brew strength, but I would say their machine was extracting better than average. The coffee actually had some of the finer notes of a decent high-grown arabica, rather than the robusta in the “mess.”

The third method is to have coffee with “Charlie.” Charlie is an inmate who actually has his own coffee maker. Well, sort of. Charlie uses an electric plug-in heating element known as a “stinger”, which he dips into a water filled styrofoam cup. When the water boils, Charlier spoons some coffee grounds in and stirs. Then he filters the coffee into a second cup. Charlier also uses decent coffee, by prison standards. Charlie uses Yuban, too. (What’s this thing about Yuban and prisons?) And he brews it strong, at least fairly strong. Charlie is allowed to get bottled water, because the guards didn’t want him to carry the glass carafe back and forth to the water fountain. Charlie says it makes better coffee, which I basically agree with.

Charlie makes a pretty fair cup, though, under the circumstances. He also told me he is a member of Greenpeace.

First, I would advise no one to go to prison to taste the coffee or otherwise. I certainly don’t miss being there, even if it was just for “the experiment.” If I ever get in trouble I will pay Sid whatever he asks to try to stay out.

But…the coffee in prison, overall, is no worse, and even in some important ways, better generally, than that in many outside venues.

The coffee may be cheap in the mess, but, due to time constrictions on meal service, the coffee never “stayed up past its bedtime” on scalding hot plates or suffered a slow death in an airpot.

The county jail coffee was actually near exceptional for food service, circa 2011. It would put most office coffee service to shame. Many air travelers suffer far more for being coffee drinkers than men and women who have broken the law and are supposed to be punished for it.

Considering that none of these institutions buy premium coffee, or even grind fresh, the passing marks show that emphasis on cleanliness, measurements and fresh serving after brewing really do account for a lot.

There oughta be a law.