Back before automatic drip dominated the coffee scene, the most common brewer in kitchens, diners and doughnut wagons was the vacuum percolator. While the vacuum seems like a complicated method, it is actually quite simple, although it’s hard for me to imagine how anyone thought it up.

How does it work? — The vacuum is a bad name, because the vacuum part doesn’t come unit the end. The idea is this: water is boiled in a lower half. As it reaches boiling, a stemmed upper half is inserted. The steam in the lower half expands and pushes the water up through the tube, through a filter and into the upper bowl. This upper bowl contains ground coffee. After a minute of contact where the hot water and ground coffee mix together, the lower half is removed from heat. As the lower bowl cools, this causes a vacuum to form and it drags the upper bowl’s freshly brewed coffee through the filter, down the tube and into the lower bowl. When that’s finished, the upper bowl is removed and you now have a nicely extracted pot of coffee. 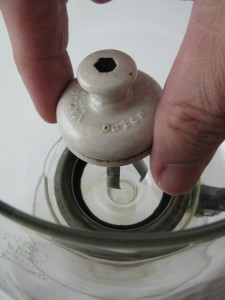 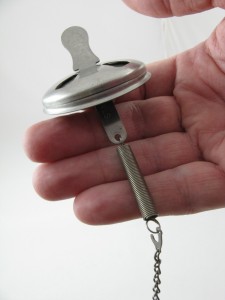 Or do you prefer this stainless steel filter 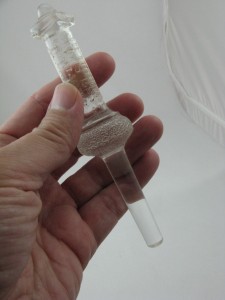 Or this Silex glass rod filter

There are electrified automatic versions, but they work in principal the same way. A second method places the two bowls together from the start, but I prefer putting them together only once the water reaches boiling because I want the water kept away from the grounds until we begin timing the contact time.

Temperature — The vacuum virtually automatically brews at between 195 and 205 Fahrenheit. Even though the water is boiling when you place them together, once the water rises through the tube and begins mixing with the ground coffee, it is usually at 205 or lower. Many people assume its boiling because the water bubbles as it mixes with the ground coffee. This is simply air escaping from the lower bowl, not boiling. Historically, there is evidence that the Coffee Development Group created its standards by observing a vacuum maker, which was very popular at the time.

Time — The time is user controlled, or at least user affected. A certain amount of predictive engineering is expected. You remove the brewer from heat after one minute in hopes the brewed coffee will take three minutes to descend back into the lower bowl, bringing the contact time to a four minute total. This is perfect for a fine grind, and if you use an old supermarket grinder, there will be a setting marked vacuum or “glass” and this is the setting for a four minute extraction.

This is wonderful…when it works. I’ve used vacuum brewers for fifteen years and I can say that 90% of the time, that’s just what happens. But, if there’s any micro gap in the seal between the bowls, if the filter gets clogged with too-fine coffee or for any other atmospheric reason, there is always a possibility of a standstill as the coffee stops descending. Once it’s stuck there are a number of possible fixes. Sometimes I just have to start over. This isn’t very often, but often enough to acknowledge it here.

Extraction — There is no more thorough extraction method known to me than the vacuum. All the grounds are completely submerged in a very short time period and the bubbling water seems to add what is sometimes called turbidity. It’s the idea that fapidly moving water facilitates extraction. Whether this is provable scientifically or not, it sure seems to work, enough so that the vacuum is always my brewer of choice whenever I get a light-tasting coffee. If the vacuum won’t bring out it’s notes, my view is that no method will. 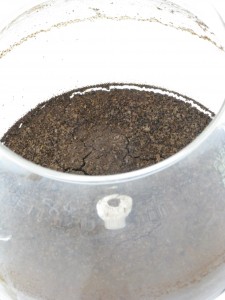 Spent grounds show just how effective vacuums are at
extracting every last drop of coffee flavor.

Taste — The vacuum does best with high-acidity coffees. It’s high temperature, that stays high throughout extraction, is just the ticket for light roasted coffees. I found it nigh perfect for Allegro’s Mexican Chiapas and its spicy notes. Armeno Coffee roasters has a number of light roast coffees that performed splendidly with the vacuum, where I was detecting a slight sourness when these same coffees were brewed using a Chemex. The coffee is, if anything, too hot when brewing is completed. If you really like hot coffee, this is your method. I simply use it as a great opportunity to clean the upper bowl while waiting for my cup to come to a reasonable drinking temperature.

Filter notes: No method offers a greater range of filter choices than the vacuum. This particular vacuum, purchased off eBay, features Vaculator’s proprietary ceramic filter held in place by stainless steel clips. The idea, as with glass rods, is to offer a slightly bumpy surface that, when placed in contact with a glass or metal bowl, allows the liquid to pass through, but little or no particulate. You end up with something in between the thick almost-unfiltered French press brew and the cleanness of automatic drip using paper filters. Some would say it’s the perfect compromise. Meanwhile, there are still cloth and paper filtered vacuums as well as a metal spring type that used to be the standard in restaurants. All allow some sediment except for paper.

Cleanup — The vacuum is slightly easier to clean than a French press. While there’s no press to disassemble, there are grounds to either wash down a sink or transfer to waste or, best of all, a compost bin. The worst attribute of the vacuum is the fact that the upper bowl must be removed while it’s still piping hot. If it’s glass, there’s an increased risk that it will break. I’ve broken more than one. Metal ones won’t break, but the hot part is still awkward. There are some ingenious answers to where to put the still-hot, still-grounds-filled upper bowl. A metal one can be laid on its side. The grounds are usually so drained of coffee that they are like a solid mass that will stay put until you clean it.

Conclusion — If you’re looking for the ultimate extraction experience, this brewer may fill the bill. It is not hard to use or clean. The biggest time challenge is waiting for the water to heat up on a stove, or hot plate. Sometimes, I split the water and transfer some to a separate tea kettle to boil, but that’s more trouble than you probably want to go to. If you’re in a hurry, there are other methods that will be more appealing. Even if it happens once, you won’t soon forget a stalled vacuum as described above. Waitresses used to wrap cold towels to attempt to induce the vacuum to cooperate and release the coffee to its lower bowl.

In short, it’s a wonderful method, but I would want another machine as a primary or backup one.