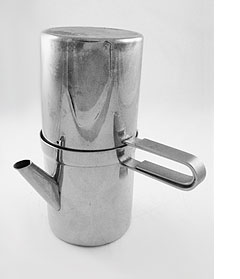 This delightful coffee brewer is commonly called a flip-drip, but actually it is probably mistakenly called a stovetop espresso machine or Moka just as often. It’s a rare animal in American, and, I suspect, most kitchens worldwide.

Which is a shame, because it makes a distinctive cup of brew and, to my sensibilities, suits a number of coffee brewing occasions admirably.

The machine itself has three basic components: half which is filled with water, a second part which features a filter holder for ground coffee and a third part which receives the coffee after it’s dripped through the filter. It is in fact a drip machine in principle. 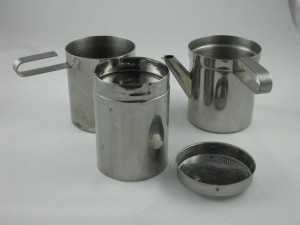 Disassembled - easy once you do it a couple of times

Fill the part with the tiny hole in it with good water up just short of the hole. Place 27 grams of medium grind coffee in the filter section and screw its cap on tightly. Insert this part into the part containing water. Assemble the other half, the half which will receive the finished brew on top. Place the finished, assembled unit on a stovetop. Turn heat on to low/medium.

As the water heats up it will expand, causing the waterline to rise, just like Al Gore explained in his fine film, An Inconvenient Truth. When the water nears boiling, a small amount will spit out of the hole in the side. 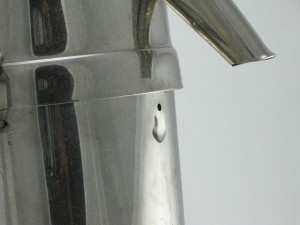 Watch for a bead of water, which means it's ready to flip

Now, shut off the heat and flip the unit over. The hot water will begin to drip through the grounds bed within the second piece. In a few minutes you will have some delicious coffee. Here is how it meets its specs, and why I like it:

Temperature — the temperature is well within accepted limits, although naturally, it varies slightly with just when you turn it over. I found by inserting a narrow thermocouple (tiny wire thermometer) into an operating unit, that it regularly measured 205, at the high end of accepted, but well within limits (195-205 is industry recommendation).

Time — the Neapolitana is grind dependent and can vary slightly depending upon how you “pack” the grounds. I do a little smoothing to make sure they lie evenly, but I do not attempt to tamp it, although I admit it occurred to me as an option. I found the contact time to be around four minutes and could be lengthened by finer grind or tighter packing, but I found no need to do so and I think it would be counterproductive.

Grounds saturation — this unit has a completely inboard filter, which is highly desireable from an engineering perspective. There is no opportunity for grounds to be missed during extraction. They are completely submerged during brewing and even the hot water has no exposure to the external environment before it contacts the grounds and becomes coffee. Its first exposure to the air is once it’s in the lower (post-brewing) half where you will sense the delightful scent from its pouring stem, maybe seeing a little steam as well. 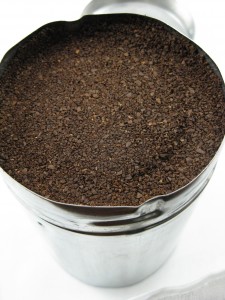 The Cup — I tried a number of coffees, but one of my favorites was a (gasp) Starbucks Yemen Sanani, my vote for the best coffee Schultz and Co. has released this year. I happened to wander by a bag of Guatemala from a local roaster, Arbor Vitae, and it delivered pleasing results as well, a lighter roast. The cup from this machine has plenty of body and acidity, although the filter delivers plenty of cup sediment. George Howell is not going to like this machine. I admit I preferred the Bunn NHB for George’s Costa Rica microlot coffee.

On a nice fall day, sitting with your significant other outdoors, this brewer makes a terrific cup and the thick stainless steel keeps the coffee nice and warm, not something I typically include in a review, but it’s a nice extra.