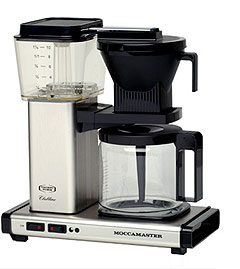 I originally reviewed this brewer’s predecessor in The Coffee Companion many years back. When I received its newest revision of the basic design, I was eager to see if my previous knock against it had been addressed. It has and read on to discover a coffee industry favorite.

When traveling to shoot interviews with eight coffee notables last year, I found a Technivorm (pronounced: Teck-knee-form) in almost every location. Many top coffee honchos have a Technivorm as their primary auto-drip machine. As Ian Bersten said to me, it’s an example of good engineering carried through manufacturing without compromise. Good design, good parts. It all seems so easy it’s hard to understand why most big coffee companies haven’t simply reverse engineered the Technivorm into their standard design.

In fairness, the Technivorm is not the only way to make a good auto drip machine. It is also not the only one made. One company, Presto, all but did build a “cheaper” Technivorm and it came and went in a flash. Apparently, the coffee literati overlooked the Presto, possibly as too good to be true. To be fair it did some things with less aplomb, but others with more, but consumers, even so-called leading edge ones, missed it.

So, we’re back looking at the Technivorm 741. What does it do that’s so spectacular? Well, it quickly heats the water to 200 degrees Fahrenheit and sends it through the grounds in less than six minutes, achieving the main technical specs of the Specialty Coffee Association for drip brewing. It does this using a good thermal heating block. Its water tubing is wide and unforgiving. I’ve owned its earlier version since the late 1980s and it’s never “limed up”, even though I use hard water and rarely clean it.

If the Technivorm has a weakness, it is its ability to shower your precious grounds with its perfectly heated water. The earlier version had a single hole the water dripped from, and I noted this in my first review. Technivorm responded by drilling several smaller holes over a still-limited space, but, frankly, it only improves its spread slightly. I still find myself removing the loose-fitting cover and stirring the grounds during brewing in order to ensure all the grounds participation. 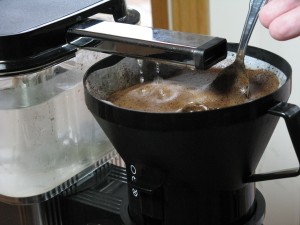 Improved multiple sprayhead or not, you still should stir during brewing.

Improved multiple sprayhead or not, you still may benefit from starting the brewer for a full minute, shutting it off for another minute, allowing the grounds to rise and settle. This extra step can make a significant difference in the ability of the Technivorm to fully saturate and extract from your entire grounds bed during brewing.

The first version made 8 4.5 ounce cups — that’s 36 ounces. The current version makes 10 4.5 ounce cups — 45 ounces. Generally, this new amount is about perfect for three or four friends to enjoy a couple of American style coffee cups together. When it’s just two of us, I prefer to use the smaller, earlier version. They brew identical cups. I timed the brewers and the new one is slightly faster, just enough to make 8 cups as fast as the older one made 6 cups. That’s exactly as it should be.

Technivorm added a new feature to the larger model, which indicates an ability to make a 1/2 batch, by partially closing the exit valve at the filter basket’s bottom, slowing the coffee’s release. After playing around with this feature for the past few years, I find it does a credible job allowing you to truly make a 1/2 batch that tastes identical to a full batch. In my tests, you can make a comparable 1/2 batch filling up the the 6-cup water line and using 36 grams ground coffee.
Drip coffee makers are always optimized to make a full batch. With some (Bunn comes to mind) half batches are all but impossible. Most consumers see owning a second machine for smaller batches as a luxury, but if you, like me, often make coffee for just two people, I generally recommend a second machine. Technivorm’s offering a half-batch feature that really works is a significant advantage. 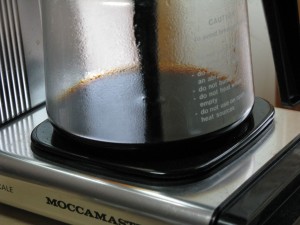 The Technivorm has a slightly eccentric habit of having a small amount of water remaining after brewing. I’ve never noticed a problem nor any negative side effect, and if it bothers you, simply wait a few minutes for the brewer to cool down and turn if upside down over the sink or a glass and the water will spill out. It’s about a tablespoon’s worth. I used to do just that, but more often I just forget about it.

There’s a demonstration of the Technivorm done by TerroirCoffee.com’s George Howell on my Coffee Brewing Secrets DVD. George wets the filter before brewing, as a preventative of any filter taste getting in the way of the coffee taste and as what another friend called good laboratory practice. I met Gerard-Clement Smit, the Technivorm’s designer, who seemed perplexed that anyone would do this. I’ve tried it both ways and haven’t detected any taste difference, and it’s nothing about the Technivorm. If you accept the need to do it, it should be done with any paper filter coffee brewer. This brings us to paper filters. George Howell further mentions, and I agree with this, that paper filters offer arguably the best way to make coffee with the viscosity of wine, with all the important oils, but none of the particulate. If you want to use a mesh filter with this brewer, I’ve seen them from SwissGold and other manufacturers, but I personally find the balance and mouthfeel just right with the paper filter. Don Schoenholt used a metal filter with his Capresso drip brewer and he prefers the slight amount of sediment, which admittedly, is a small amount. If you like French press-style gobs of sediment, you’re not going to get it using autodrip with any filter I’ve tried. Plus, the press brewing temperature and brewing stillness is going to deliver a different tasting cup with or without sediment.
The absolute middle brewing temperature of 200 degrees, the 6 minute contact time and paper filter work to give you an auto-drip coffee brewer that works well over a wide range of coffees. The brew temps are high enough to deliver acidity with lighter roasts, but just about any coffee I tried came out fine. I might prefer a slightly lower temperature for Peet’s aged Sumatra, but Allegro Coffee’s Sumatra Mandheling (ask for the Mandheling, different from the Organic Fair Trade) was excellent.

I used up to 72 grams of medium-fine grind coffee to make a full batch, the rough equivalent of the 65 grams I used in the older/smaller Technivorm. Recently, after a lot of tests with an assortment of friends drinking the Technivorm coffee, I’ve found I can back off to around 60 grams for a full batch, which is my recommended start point.

Conclusion — If you’re looking for a long-lived simple automatic drip coffee brewer that makes 10 4.5 (just shy of 8 regular/6-ounce cups) of coffee, the Technivorm should be at the top of your list. It retails for nearly $300, and its only potential caveat is you might need to stir the grounds to ensure the best extraction.