Coffee on the Auction Block 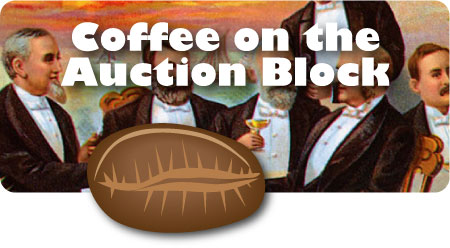 Marcel Duchamp upon viewing an airplane propeller close-up for the first time in 1934. “There is no way painting can compete with this”, was his final proclamation.

While I’m not ready to toss out my favorite objects d’art to collect only assorted industrial designs, I will admit to a certain fascination with inventions of the machine age.

While conventional artworks adorn the walls, or take up space in an otherwiase vacant corner, machines look cool and do thing. Some of the best designed coffee gear is beyond function in its appeal, at least I think so.

Apparently so do others, all gathered together under a canvas tent to outbid each other on some of the treasures sold from the recently closed John Conti Coffee Museum, in Louisville, Kentucky.

So it was, that Patricia Fitzibbon and I flew in for a visit and the possibility of finding some new acquisitions for our growing collection.

Like all great artworks, great industrial designs tell a story, the development and refinement of human invention. For this reason, as much as I detest certain aspects of shopping malls, for example, they are, in effect, modern art museums. Often, their “exhibits” are a better reflection for the life and times of our modern world than the so-called modern art museums, which often appear to me as out of touch embittered mausoleums for the rich, demonstrating only how remote the aristocrat has become from their previous leadership roles. Of course, to deny the rich their role in defining the shopping mall would be in itself a great mistake.

Anyway, back to Louisville, John Conti, Louisville’s premier local roaster, amassed quite a collection over the past 17 years, and had until this year, displayed most of it in a museum open to the public. Although well attended, Conti, probably realizing he had at least one of everything, decided to call it quits, keep a few choice items and allow his booming wholesale coffee business take up the museum space. His museum closed officially in January.

Auctions such as this are as close as most collectors can get to a Las Vegas-style adrenaline rush, and energy to all this that I found quite appealing. I was probably lucky that I forgot my check book, or this issue would be printed on cheaper paper stock. First, the most surprising thing to me is that old coffee tins do very well in commanding respectable or perhaps the word is “outrageous” prices. Save your old Maxwell House cans. Or is it just nostalgia for the time when these brands were still quality names, which means any can after 1075 is likely worthless. For what it’s worth, I saw Saturday morning sales of 1940’s Folgers coffee cans starting at $70. All I know is I was saving my cash for more interesting stuff.

I was glad I did because soon, the bidding moved on to some classic coffee grinders. Those who think latest is always greatest will be surprised when I tell you that coffee grinders were better fifty years ago. Hobart and others built grinders for shops that did a better job on the grinds most customers used then (and still do). The fact that they were so well built is in evidence by the number of them still in existence, and for this reason, they are the bargains of collectors. I was able to pick up a 1920’s Hobart for just $40. As expected, the unit performed perfect grinds, with no adjustment the moment I got it home. I picked up another less-well-known grinder for $12. The ultimate slap in the face of new technology came when the auctioneers raffled off an almost-new Ditting Swiss grinder (current new retail: $1,200) for five dollars. It was a surreal moment, but I have to remember that I was among collectors and, in fairness to the Ditting, it isn’t bad (although it does nothing to unseat the Hobart) it’s just not rare or old.

Many of the action’s participants were members of the Mill Association, a collectors’ group dedicated to old grinders. One of its members told me that he doesn’t even drink coffee, after I asked him which grinder he thought did the most even grind. I still can’t quite understand what possessed him to become obsessed with grinders for a product he doesn’t consume, but, I will say that this group added a strong presence to the ceremonies. There were others who were also coffee connoisseurs and our discussions were lively and fruitful. It was nice to discover that there were others outside the few I know, who realize the value of these products.

This article would be remiss if it did not highlight the presence of Ed Kvetko, former CEO/co-owner of Gloria Jeans Coffees. Kvetko, who long ago told me of his dream of establishing his own coffee museum, was there, along with Gloria Jean herself and his now-endless supply of money, which on at least one occasion, he used to outbid me.

It became first unusual, then irritating, and ultimately humorous to hear the auctioneer’s gavel pound the table, followed by “number five”, Ed’s bid number. After awhile, members of the audience, having no recourse since they were constantly being outbid, behind chanting Ed’s number in unison in sync with the auctioneer. Whereas I and others needed to raise out hands to grab attention of our bids, “number 5”, never out of the interest of the auctioneer, was able to take home all kinds of objects by the slightest raise of his eyebrows to signal interest. Ed’s body language was the only clue one had as to the possibility of outbidding him. At times, when an object would obviously only serve as backup for one already in his possession, Kevtko would sit relaxed in his chair and conveniently stop bidding at just over $20, allowing the middle class participants an opportunity to pick up this or that knick-knack.

Other times, however, Ed would move forward on the edge of his sea, at rapt attention, cigarette dangling from his lip and immediately outbid even the bravest of competitors. Considering that I know Ed has been around the world on similar expeditions, I can’t wait to see his final museum, which he told me he’s locating near his house in Fort Myers, Florida.

After finally outbidding “number five” on a Michael Sivetz-designed (and signed) home roaster, I finally relaxed, only to enter an accidental bidding war with Patricia. Although she was sitting immediately to my right, we became confused during a bid for a 1970’s Kitchen Aid consumer grinder. Knowing how much I wanted it, Patricia entered a bid, which I heard but did not realize she had made. In the tension and confusion, I raise the bid, to the surprise of the auctioneer, who knew we were together, although he realized a good thing when he saw it, and snapped his gavel to close the sale. I glanced over at Kvetko, who smirked.