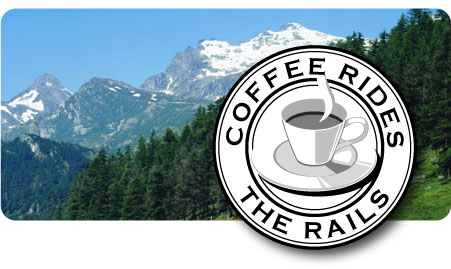 Back in the days when you could find coffee perfection in any top restaurant, you could also be gentled into caffeine bliss during any of several top notch train runs across America.

It was all part of the taming of this land that rail travel be as luxurious as possible, as a way of compensating the developers of our country for the enormous spreads of land, across which we now soar in a matter of forgettable hours.

You’d never know on Amtrak that the crack Twentieth Century, hurdling passengers down the tails at 90 miles per hour, served an excellent blend of Brazilian and Mocha. Coffee brewed in a sparkling clean urn was made fresh on the hour by the book (one pound of coffee per pot) plus a copious extra handful of fresh grounds in order to give it that extra flavor expected by travelers who were issued both the New York Times and Wall Street Journal each morning in its diner.

A glance at a menu from a golden age diner shows no special hype about the coffee. Naturally, a passenger would only expect a train with the best food to serve the finest beverages aboard. As for the railroad management, every possible consideration was given to keeping business and tourist travel at the peak of perfection in order to maintain an image of efficient supportive of the really profitable freight business.

A discussion with Dana Ishman, a dining car chief steward with the Amtrak, but also a real historian, proved instructive, Ishman told me that each train had its specialty. “The Nebraska Zephyr held a reputation for the best, thickest steaks and served only two pounds russet potatoes. The Denver trains actually stopped on a train trestle over a river where local fishermen handed up fresh-caught trout”.

I asked Ishman what coffee his train used when the Burlington operated it… “They used a blend from a roaster in Chicago who delivered the coffee direct to the train just before departure time”, he offered. I then asked him if they made the coffee particularly strong. “Not by my standards. But then railroad people like good hearty coffee.” Then he volunteered, “If you ask my opinion, the key was they never let the coffee sit and the urn was always scrupulously clean. You go to a restaurant now and often the coffee is just sitting there for a few hours, especially if it’s an off-hour. That just wouldn’t happen on any train of mine!”

During this last statement the otherwise soft-spoken Ishman took on an authoritative tone that matched the images the people who ran “restaurants on wheels? held during these years. According to legend, Great Northern’s chief steward William Kurthy ran his trains with a temper to match the piping hot coffee he served. Kurthy would march up and down the aisle between tables and inspect the coffee cups on them. If one was empty, a single flaring look from Kurthy commanded an immediate refill, from an urn cleaned nightly as the passengers slept. Kurthy, or “Wild Bill”, as he became known, had a mesmerizing but maniacal control over his domain. Never content with the well-earned reputation for excellence on his trains, he had a habit of publicly and ceremoniously firing waiters and other servers for the slightest infraction, always at the height of the dinner hour. These exhibitionist dramas were always much appreciated by the diners, who boarded the trains in knowing expectation of both the level of service and Kurthy’s national fame as a America’s most fanatic food service operator. Lest you think he was tough just on the hired help, Kurthy was perfectly suited to bully passengers as well.

In great railroad chronicler Lucious Beebe‘s words, “Tiny old ladies who ordered tea were forced to eat T-Bone steaks smothered in mushrooms, and retiring passengers, numb with good living, spoilt by Kurthy’s team, were met at bedtime by a grinning waiter with a foot-high stack of rare roast beef sandwiches and glasses of half and half.” Glasses of half and half?!?!?

My research shows that coffee during the great rail era was simply expected to be top drawer. Before the age of espresso/latte evening repasts, the after dinner blend of choice was 1/3rd Mocha to 2/3rds Java. This staple was considered the staple and the Broadway limited served it. Rich Colombian or other fine Latin American coffees were the wake up call. Film star Spencer Tracy‘s regimen was to be awakened at 5AM, whereupon he drank an entire pot of specially-made strong black coffee (Tracy reportedly hated weak drinks of any kind) and then returned to sleep for another hour. Orson Welles has his dwarf manservant boarded the train with his own blend, heavily laden with beans from Sumatra in addition to the twenty or so books with which he always traveled. Year’s predating the controversial McDonald’s scald trial were several lawsuits during the railroads’ heyday where passengers claimed injury due to waiters spilling hot coffee on them during the sudden jerks as the trains rolled uneasily on rugged track sections. Rail workers too, unprotected by government worker’s compensation, were required to sue for their on-the-job injuries as they remain today.

The great coffee merchants of the day, strategically located in high visibility railroad towns went to extraordinary ends to serve the best fresh coffee to their customers. Dallis Brothers in New York. Stewarts and the House of Millar in Chicago. Boyds in Portland. Hills Brothers (then using only high grade arabicas) in San Francisco. In the days when famed author E. B. White was once quietly asked to leave the diner because a torn sock and a spot of flesh had been spied just above his shoe top, a cheap robusta coffee would have been denied access to any respectable railroad diner. Even predating the great dining cars were the along-the-route food oases operated by British emigrant, Fred Harvey. A glance at a Harvey company training manual describes the necessary ingredients to a successful cup of coffee, Fred Harvey-style: “A great cup of coffee is brewed with fresh coffee, made strong and served within minutes of brewing, piping hot.”