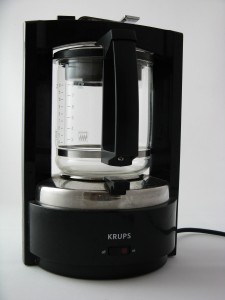 Here’s a classic case where the marketing department tried to get a basically very good machine to do something it was not designed to do. The packaging indicates it as a way to make an espresso beverage for several people at once. Meanwhile, the product styling makes it look like just another automatic drip machine, which it definitely is not.

What Is It? — The Krups Moka is, if anything, an attempt to make a large quantity of something called a Moka. Moka is a problematic word. To much of the world, it means chocolate or a coffee bean varietal from Yemen. In Europe, it means a sort-of stovetop espresso beverage. The Krups Moka is none of these. It is a slightly pressurized automatic drip machine, a sort of hybrid. I would hesitate to compare it to a stovetop Moka and it is certainly not any kind of “mass espresso” machine.

I decided to test it according to drip standards, although, as you will see, it is really in its own category and you will be happiest if you regard it for its own value, rather than attempt to slot it as a preexisting type.

Temperature — The Krups Moka T8 works like an electric water kettle. The water boils and that pressure forces it up and over the grounds. Most automatic drip brewers are designed to deliver the water to the grounds at lower-than-boiling temperatures; the standard is 195 to 205 Fahrenheit. Here was see boiling or very near it water, with somewhat long gaps between as the water is boiled in pulses. 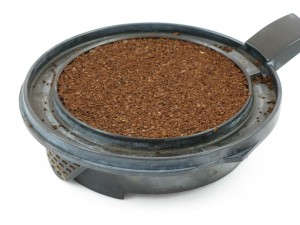 Time — This makes it very difficult to determine the exact water/grounds contact time. The time from when the water first hits the grounds until the last drop leaves is something like seven minutes. If boiling water is truly in contact with fine grind coffee for this duration, we could expect some pretty bitter coffee, couldn’t we? 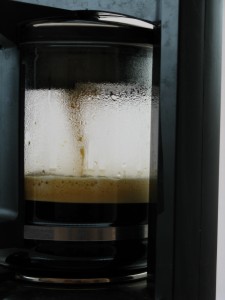 Grounds saturation — The Krups Moka T-8 does a very thorough job of getting all the grounds wet. The combination of a sealed grounds chamber and the pulse flow of pressurized water makes sure no flavor is left behind. There are also six exit holes in the filter basket, encouraging a quick escape once the water has contacted with the grounds. 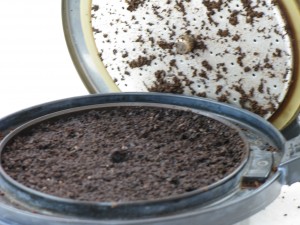 Spent grounds are bone dry, just the way you want them.

Cup tasting — I have observed that lighter roast coffees seem to handle higher brewing temperatures. George Howell, Terroir.com, has many beautiful light roast coffees. He buys micro lots of prize winning coffees and it shows in both the cup and my monthly charge card statement. He’s got a long-term relationship with La Minita Costa Rica coffees. I put sixty grams of fine grind La Minita in the Krups unit and it tasted fine, with surprisingly no bite that one might expect using these high brew temps. What really surprised me was putting some Boyds coffee preground in this brewer. It’s ground for auto-drip and it’s a comparatively dark roast. I’d expected the unit to favor lighter roasts, but this coffee compared favorably to the La Minita. It’s a blend and a complex one, far more than I realized. My previous cuppings had been in a Technivorm.

I expected light roasts to taste right, but I didn’t expect a darker-than-average coffee to shine. But, the Boyd’s Rip City Blend, tasted about as good as any coffee I sampled. Perhaps a greater surprise is that it’s pre-ground. I know some of you are going to be shocked, but it’s true. I was pondering why, and I think part of the reason has to do with the excellent grind pre-ground coffees have. It’s one area where they exceed almost any grind possible at home. Also, as Randy Layton expressed to me as far back as when we served on the Specialty Coffee Association’s Technical Standards committee, as well as in our recent video Coffee Brewing Secrets, he thinks that coffee needs to rest after roasting before it extracts to its potential. I know I’m speculating, but it seems possible that high pressure brewers require more exact grind in order not to impede their flow rate. That’s a guess, but the results I got with the Boyd’s sample was as complex a cup as I’ve had, with absolutely no bitterness.

Conclusion — The Krups Moka is not for everyone. Many consumers won’t understand why it takes nearly five minutes just to heat the water up before its first burst. Nor will they appreciate that the seemingly overside bottom water boiler is not truly a warming plate. The first cups will be piping hot, but the coffee won’t keep warm for hours like it does with some auto drip machines. The exact placement of the brewer under the hot water release valve is critical. I misaligned it once and it was quite a mess. Once you get the hang of it, it’s not difficult, but it’s non-standard.

What sets the Krups Moka T-8 apart most though is the outstanding cup quality. I truly wish they’d reintroduce it to Americans as at home coffee is getting more serious. Perhaps they will. Meanwhile, check the auction sites. It’s a winner.