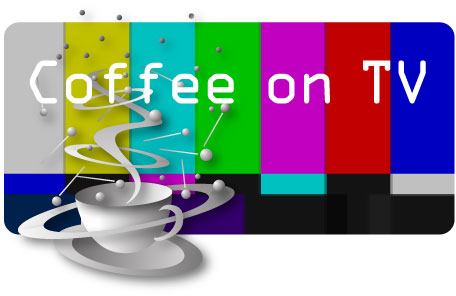 Andy Griffith Show without Sheriff Andy Taylor making a trip to Aunt Bea’s lace-curtained kitchen and pouring himself a cup of Maxwell House from the percolator.

My father had a somewhat different reaction to the trouble that boys make than television’s Leave It to Beaver father Ward Cleaver. Ward should be brought back, if just to prove it is possible to have a cup of coffee to face every life challenge and still maintain calm. Although every episode I remember featured the electric percolator, there is a persistent rumor among coffee aficionados that there are early episodes showing a vintage vacuum coffee maker in June Cleaver’s pristine kitchen. 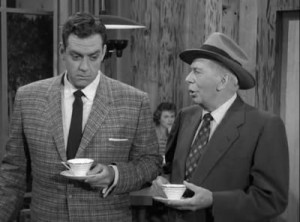 Those impressed with the legal might of the recent “dream team”, must have forgotten Perry Mason. Raymond Burr, television’s he-man lawyer who would have scoffed at the “power tie”, took just fifty-four minutes each week to have his client found innocent rather than the sheepish “not-guilty.” Mason, fueled on coffee throughout the seemingly twenty-four hour days he worked, plowed through and did the police and prosecution’s work as well, never ending a case until he produced the real murderer. No wonder the LA police have never recovered from his cancellation. Della Street, in Barbara Hale’s superb and understated performance, insisted on bringing fresh coffee into every scene. I viewed one episode where Mason brought a half-dressed suspected damsel to Miss Street’s apartment in order to hide the accused from Lieutenant Tragg. 3 a.m. or not, Mason’s secretary instinctively went to the kitchen and brought forth freshly brewed coffee.

James Bond may have been the movies’ first spy, but for most American kids, it took two spies, Napolean Solo and Ilya Kuriakan in The Man From U.N.C.L.E. to really cement our relationship to these dogs of the Cold War. U.N.C.L.E. headquarters was stocked with both young studs whose muscles were held in check by firearms in shoulder holsters and beautiful false-eyelashed women carrying coffee carafes. Napolean and Ilya didn’t bother to wait to arrive at headquarters to drink coffee. A favorite coffee moment occurs right at the start of “The Deadly Decoy Affair.” David McCallum, as Ilya, darts out of his New York jazz lp-filled apartment brandishing a coffee cup and, still sipping, slips neatly into Robert Vaughan’s (Solo) convertible. Moments later they drive up inside the U.N.C.L.E. garage, where they do gun battle with some enemy THRUSH agents. Although the coffee cup disappears in order for Napolean to shoot two or three of the jack booted thugs, his coffee-charged bravado carries him proudly when, surveying the mass of bodies he and his comrade have just eliminated, he deadpans, “We haven’t even punched in yet.”

My parents always tried to stop my watching Dobie Gillis. I don’t know why this particular program ranked so low in their book. I remember my mother voicing concerns that young people might “get the wrong” idea watching Maynard G. Krebs, Bob Denver’s beatnik character. Naturally, we watched every episode, although the only striking memory I have is of seeing cans of coffee in father Herbert T. Gillis’s corner grocery stacked behind a sign advertising 99 cents per pound prices. I always longed for a scene where Maynard would introduce us to his beatnik friends at a coffee shack, but somehow the show’s producers failed to utilize Maynard as anything but a way-out loner, with no other links to the subculture but his dress and scruff-beard. At the other end of the unreality spectrum, there was Hazel, an already out-of-date character developed in the post World War II GI promise/fantasy of upper-middle class luxury for having beaten both Germany and Japan. My parents both watched this program, laughing buckets when Shirley Booth ran her buxom frame at trot-speed in response to any irrational requests from her scatterbrained family employers. Hazel‘s ultimate obnoxiousness was that she appeared not to pay any attention to how many scoops of canned coffee she spooned into the by-then standard electric percolator. Here’s hoping the coffee was better served at the inevitable family therapy sessions where this dysfunctional broadcast clan must have gone, maid and all.

Coffee was best left to the working class, after all, television’s real audience backbone. While Hazel’s boss hardly touched his coffee, Dragnet’s Joe Friday took his coffee like communion, especially in the series’ 1950’s heyday. First with partner Ben Romero (shot and killed in the series after actor Barton Yarborough died of a heart attack) and then with Frank Smith, Friday lived on coffee and cigarettes, a diet no longer fashionable. Unlike modern police methods, Friday’s always produced the right suspect, with airtight evidence and likely a fully signed confession, although the use of a high intensity lamp aimed directly at the suspect’s beady eyes seemed to help.

Jack Webb‘s staccato production style seldom allowed for close-up shots of coffee making, but when he and a sidekick poured themselves a steaming cup in their squad car during a stakeout, you knew it was good and strong. No matter how many cups, Friday never had the coffee jitters. If he did, he knew he could release them by taking an extra long puff on a filterless Chesterfield cigarette, or by delivering one of his famous clipped lines of sarcasm to a reluctant witness, always to the nods of everyone present. I like to picture Webb, night creature, sitting in a late-night coffee bar, sipping hot java (even his first name was slang for coffee) in his trench coat. That dream, by the way, is still in vivid black and white. Later Webb shows, filmed in weak color, fail to provide any of the atmosphere of the early series. It may be my imagination, but I don’t think there’s much coffee, either.

A lot of people have fond memories of Bonanza, but not I. I remember it being on Sunday night, which was right before Monday’s school week began. Wrestling with bouts of depression looking towards another week of academic imprisonment, I felt little affection for this all-male ranching family. Their coffee came from stovetop pots, indicating that they were boiling the brew. There is no romance in any aspect of old west coffee making.

I couldn’t really pretend to discuss television’s treatment of coffee without mentioning that 60’s angel of bad coffee-making and domestic meddler, Folger’s Mrs. Olson, played by some bad actress whose name escapes me. The script was the same for all these ads: A 60’s housewife, distraught at having her lack of social and culinary skills exposed before her husband’s boss/mother/golf buddy is about to fall apart (too many diet pills?) behind the kitchen door, when in comes this smiling patron saint of middle brow entertaining, Mrs. Olson. The young woman moans that she’s never made good coffee (the most believable piece of dialogue contained) and now is compelled to perform. Does Mrs. Olson glare over at the electric percolator and accompanying can of supermarket swill and growl, “There’s your problem, Bimbo!”? Of course not.

In true corporate form, Mrs. Olson, trademarked “Svedish” accent in high gear, assures her tenderly that there’s no secret to making good coffee. Then she ushers her young charge back into the living room and proceeds, I believe, to pull a small sack of beans out of her purse and probable hand grind them and then brew them using a vacuum coffee maker. All the audience knows is a few frames later, in walks Mrs. Olson with a percolator (no doubt as a serving vessel) full of fresh-made coffee. Hubby, realizing it’s the weekend and bubbling with testosterone, looks over at his wife and exclaims “Honey, that’s the best coffee I’ve ever had.”

Not bully content to remain a backroom consultant, Mrs. Olson cattily pokes a small hole in the hostess’ ego, by crediting THE PRODUCT. “Folgers is mountain grown.”

‘It’s the richest kind,” responds Mrs. Olson, apparently satisfied that she’s thwarted any kind of false glamour that might be ascribed to either the hostess or the coffee maker.

It’s this kind of thinking and false advertising that will someday be known as having led to our tumbling post-World War II empire.

In recent years television seems to have been content to limit itself to products more in keeping with their audience’s true sophistication, such as instant coffee.

Perhaps it’s best, as I have yet to see a truly fine product or proper coffee making appear on television. Apparently, like the Irish language and freedom in Eastern Europe, fine coffee remains a person-to-person art form best left off the tube.