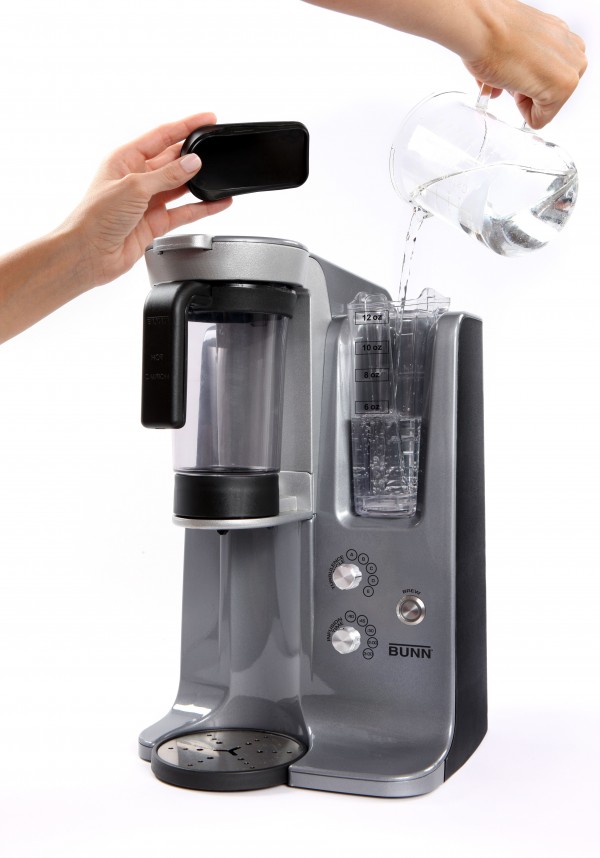 As one of the earliest manufacturers of an autodrip coffeemaker, Bunn is not known for change. The Trifecta Home is going to wake up Bunn’s critics. It is not an extension or variation of any previous design of theirs or anyone’s. It is a totally new concept. It is bold.

The Trifecta Home takes the best from several coffee brewing methods, elevating the art of control during brewing. It steeps coffee like a French press. It agitates the brewing chamber during contact and forces finished brew through the exit hole upon completion, emulating the best of vacuum coffee brewing. In fact, the Trifecta Home appears to be everything except what Bunn is most known for, that is a drip coffeemaker.

Let’s get this out of the way early: The Trifecta Home is not Bunn’s new home espresso machine, and to me that’s a good thing. What is the Trifecta Home? It is a new coffee high-extraction brewer that wrenches every precious bit of acidity from coffee, allowing some very focused user control over some physical variables for the first time in an automatic coffeemaker. Why am I happy that it is not an espresso machine? Acidity = the high notes, the most expensive flavor ingredient of the best coffee beans. Light roasted single origin coffees fired out as espresso shots give you acrid, overlit flavors. These same coffees in the Trifecta and will give you beautifully extracted balanced coffee with the full spectrum of tastes.

Perhaps the Trifecta Home will be compared mostly to the commercial Clover machine. I’ve tried both side by side and the Clover accentuates a low bitter note in almost every coffee I’ve tried in it, and the Trifecta does not. I limited my comparisons, but it may be naught anyway since Clover, after being bought outright by Starbucks, appears to be all but gone. Certainly, no one has suggested a Clover Home is forthcoming.

Meanwhile, apparently Bunn’s years of underextracting grounds using shorter-than-average contact times has paid off. The Trifecta Home’s contact time is short, a minute or so. The two longer settings are for tea. I did try doing coffee at the tea setting, but preferred the three coffee settings overall.

The brewing contact temperature is smack dab at 200°F, as usual for a Bunn machine. An ‘instant on’ steady temperature is especially important given its brief grounds/water contact time. Bunn is known for good, consistent water temperature, and the Trifecta Home is no exception. Unlike most earlier Bunn drip machines, the Trifecta Home has no onboard heated tank. I found even if I unplugged the Trifecta Home and plugged it in a minute before brewing, the temperature and startup time remained roughly the same. If it is not instant-on, it is very, very close to it.

The Trifecta Home injects air to agitate the brew. The number of times it does this during brewing is one of two user adjustments. Bunn claims varied agitation tilts the body versus acidity of the coffee. More agitation reduces acidity; Less agitation reduces body. My tastings confirm this. Turbulence in coffee is just like it is on an airplane flight… air bubbles that shake things up. Bunn’s promoted its use of turbulence in brewing for a while now. The Trifecta has finally convinced me they know how to use it to make better coffee.

At the brew cycle’s conclusion the coffee is forced from the brewing chamber down into the supplied beaker/carafe with such vigor the spent coffee grounds are almost completely dry. I suspect they are using air pressure to force the liquid out so thoroughly. Regardless of how, the combined turbulence and efficient separation of the grounds and brewed coffee do the best job of extracting and leaving no liquid behind in the grounds of any brewer I’ve yet tested, matching vacuum brewers and espresso machines.

Interesting: Bunn recommends using coarse ground coffee. I’ve suggested this for years. Maybe we’ve both learned something from each other. Interestingly, after a month or so I found I backed off from the recommended 22 grams of coarse grounds per 12 ounces water brewing formula. I got my best results using 18 grams fine grounds per 12 ounces water. This is my preferred Trifecta Home recipe with almost any coffee I’ve yet tried as of this writing.

The cups are so good, so rich and full-flavored, nothing is missing. The amount of coffee produced, between one and two six-ounce cups, is just about perfect for two. Considering how many people have one or two cups, it’s, from a ‘mileage’ point of view, economical, and doesn’t fill trash heaps like the Keurigs do. It’s worth noting that the Bunn Home Trifecta also does a single 6 ounce cup with equal aplomb. Few machines so equally match taste when you change batch size.

Oren’s Daily Roast’s Ethiopian Longberry Harrar had all the flower you could ask of it and, believe me, this is one beautiful floral bomb! Stumptown’s Guatemala Antigua Buenavista did itself proud with the unique black cherry and milk chocolate notes I so enjoyed in this bean. I Have A Bean’s Uganda Bugisu Kapchorwa, which I’d brewed recently in a manual pourover, just burst forth with cinnamon and malt flavors and a powerful complexity that justified this machine’s ability to carefully agitate the water while in contact with the grounds in controlled doses. I could literally dial in this complexity to alter the balance. Consider that once I adjusted the settings just so, I could repeat these perfect cups in succession reliably, almost casually. This is a significant benefit. Before the Trifecta Home, I felt I could have perfection or consistency, but typically not both. And that’s the Trifecta Home’s true greatness.

Some folks will ask me, “Kevin, do you really expect me to put $500 into a coffeemaker during these economic times?” Hey, I’m not a 1%’er. Yes, $500 is a lot of money, even to me (ha!). I believe you can probably match the cup quality, although I’m honestly not certain, using your best vacuum, Chemex, Hario, Aeropress technique. But, every time? The Trifecta Home is for the coffee aficionado who wants the best, wants it consistently, and wants ease in achieving this perfection. And, I do mean perfection.

The cost of entry is high, but to someone who spent $500 on a DSLR camera, a plasma TV, or other top consumer gear it’s in line. How about a decent prosumer home espresso maker? If you like coffee, single-origin coffee as much as I do, you’ll just accept it as the cost of entry to a big step up in our hobby. Let’s put it this way. If you own one of these, I’ll never again worry about giving you coffee for your birthday and wonder if you will begin to taste what I can taste when I brew it. Let’s see: a state-of-the-art, made in America machine that brews coffee like a top café barista. What more do you want?

It’s the machine I’ve waited for since I started drinking coffee. If you can afford one, it’s a no-brainer. Bunn knocked it out of the ballpark with this one. The Bunn Trifecta Home almost deserves to rename a cup of coffee a Trifecta, it’s that outstanding. It defines the state-of-brewing-art according to me and The Coffee Companion.