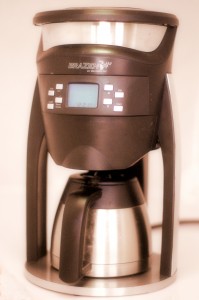 Automatic drip coffeemakers used to be considered a dead category. No longer, there are several new machines. The Brazen is well named because it’s the most daring and innovative. It is the brainchild of inventor/entrepreneur Joe Behmor, whose Behmor drum roaster is popular among home roast enthusiasts.

Joe is my kind of guy. I like options and he gives us lots of them. This is the first home consumer model that has the following combination of features:

• Variable temperatures – you can customize the Behmor Brazen each time you brew for any temperature between 180°F and boiling. This is the only consumer automatic drip machine I know that offers this feature. Coffees taste different when the brewing temperature changes.

• The Brazen has a pre-infusion cycle. This means your ultra fresh grounds can get wet with a few ounces of how water, then they can rise and fall, so the rest of the brew cycle can proceed normally. It’s a huge taste difference in the cup and other than manual drip users almost no one offers this feature. Joe’s automated this. You can choose any time between one and four minutes depending upon the coffee grounds’ freshness and your patience.

• The Brazen even supports and encourages unorthodox practices like inserting a 5-cup hand-blown Chemex in order to automate a manual drip maker. The unusually wide dispersion sprayhead gives you kind of water coverage needed for a number of manual drip brewers. Can you imagine any large manufacturer taking such a magnanimous, inclusive approach?

There are other features, but these are the ones that excited me and that distinguish the Behmor from its competition. Suffice it to say, this is an aficionado’s brewer. Of course, promises must be kept by test results. It’s all for naught if it doesn’t deliver.

It also could mean a consumer’s worst nightmare if complicated menus and settings limits the Brazen to the coffee elite. How easy is it to program?

Let’s answer the second question and then go to test results. The menu is intuitive enough to be a 90s-era Sony camcorder. Pat and I needed to leave on a weekend drip in the middle of testing. I left the Brazen set up in my kitchen, expecting it might frustrate my wife’s cousin Leigh who stayed over and is fond of calling electronic settings “thingies”. Happily she was able to brew beautiful coffee with a 30 second tutorial as I was walking out the door. You literally could buy one of these and use it without every worrying about any of the settings, or put it off until you get picky.

As far as test results, I have good news. The temperature is accurate and rock steady. The sprayhead can be observed and it gives ample coverage. Thanks to this and the pre-infusion feature, grounds end up good and soaked as it should be. The amazing thing was being able to report this using coffee hours fresh from being roasted.

Fresh roasted coffee foams up when water hits it. Anyone who brews using a kettle knows to simply wait until the grounds rise, the carbon dioxide gas emits and the grounds all back down again. The Brazen Behmor accommodates this by spraying just enough water to wet the grounds. Then it stops brewing, which can be programmed to last between 1 and 3 minutes, depending upon the freshness and how determined you are to address it. After that it brews continuously. This is an effective way to accommodate fresh coffee. The only other coffee brewers in history I know of that similarly dealt with fresh grounds were the Chemex automatic, many years gone and a Braun brewing in the 1990s which used what they termed interval brewing.

The coffee I did most of my testing with was a Costa Rica from Arnold’s Coffee in Elizabethtown, Kentucky. Arnold roasts beautifully, one of the best. However, I have a confession. I don’t usually care for Costa Rican Coffee, even Bill McAlpin’s, perhaps the most OCD coffee producer in the world. I swear he dusts the coffee trees. Anyway, using 63-65 grams of coffee and brewing temperatures upwards of 206°F, I finally found the caffeinated Nivarna I found I could emulate a French press taste using lower temperatures. I’m sure people are going to start posting their favorites here and elsewhere. This brewer puts control and fun in your hands. I have no knocks or gripes whatsoever.

Perhaps my favorite tests were using Oren’s Daily Roast’s two Guatemala coffee varieties, one from Antigua and the other a Coban. With the Brazen I had a great time brewing each to perfection. I found I was able to optimize each coffee to my taste buds at brewing temperatures in excess of 200°F, the Coban tasted ideal brewed at 203°F. Short of brewing in a vacuum maker, I don’t think I could reproduce the flavors I achieved in any other brewer.

I repeated the above tests using a five-cup hand-blown Chemex (the six-cup more commonly available is just a bit too big to fit) inserted into the Brazen’s carcass. It performed beautifully. Joe Behm brilliantly devised a manual release setting that allows you to choose a brew temperature, get the water up to that point and release showers of hot water over your Chemex. The results matched or exceeded what I got using the Behmor by itself. Perhaps I’m biased in favor of the Chemex filter or the multiple pauses during brewing. At this exalted performance level one should expect a little subjective hair splitting. Suffice it to say it’s another brewing option that will increase the Behmor’s value to its audience. 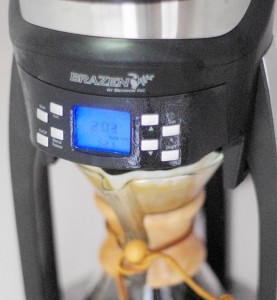 The Behmor Brazen takes paper filters, but after a few times, I just started using the supplied metal filter and it works just fine. Joe Behm told me he prefers the gold filter. My only caution is to be sure to keep it clean, immediately scrubbing it after use with a little perfume free detergent.

I prefer glass carafes, but the thermal carafe works fine, does a good job of holding the coffee temperature steady for an hour or more. I just make sure I thoroughly clean it when we’re done with the same detergent regimen I use for the filter. But, I just hate cleanup.

Build is good. Obviously I can’t judge long-term longevity. I try to avoid the disdainful and vulgar subjects of money and value, but I was actually surprised to find this much technology in the $200 price range. Consider other passions where cutting edge technology can be had for so little.

Joe, thank you for this brewer. It not only holds its own amidst the other top performing automatic drip machines, but French presses, Hario v60s and Chemexes as well. For the coffee brewing hobbyist, there is really nothing else out there like it.