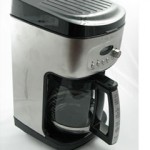 I was excited to try a Cuisinart which has definite curb appeal. And, fourteen cups? WOW! That’s a lot of coffee. I’m sure Cuisinart was proud of the engineering triumph of putting so much yield into a fairly small size footprint. Ever a value champ, the Cuisinart adds a permanent filter, which I used. Not only does Cuisinart brew the largest size brew, it offers a special 4-cup setting. Cuisinart’s fit and finish is not quite up to Saeco’s — I had to jimmy the filter door to close properly. Its brewer intuition is user friendly, however. The charcoal filter is easy to insert. You literally drop it in and it places itself properly into position. The instructions counsel using SCAA measurements, 85 grams for a full fourteen cups. It’s like having the babysitter show up with a Bible in her hand. Everything looks good.

Cuisinart’s got a good seal, good sprayhead, and good extraction.

Temperature — The unit takes its time to reach a credible brewing temperature. It took nearly three minutes to reach 180 degrees F. This is like a Boeing 747 climbout, which is slow. Worse, it never gets to altitude — the brewer, not the plane. It stays there through much of the brew cycle, rising to the bottom official brew temperature some ten minutes into the brew cycle. It peaks at 195 F at the eleven minute mark.

Contact time — The cycle takes a very long 13 minutes start-to-finish. That’s a long time to subject any coffee grounds to hot water, even when the water isn’t very hot.

The V-shaped filter means there’s a concentrated bottleneck where some coffee grounds are overexposed to hot water to begin with — which only increases bitterness.

Extraction — The grounds basket inspection revealed a good extraction of all the grounds to all the water. Too bad the other variables were poorly met, because the water flow design is obviously a good one.

Taste — The resulting brew reflects their attempt to temper long brew times with substandard hot water. The coffee was overextracted; bitter, and totally lacking in the refined flavor notes that should be present, especially given the healthy amount of grounds used. It was full-flavored but devoid of anything special. I tried a sack of Colombian coffee from Dunn Brothers in Minneapolis. This coffee was super fresh, which was an acid test of the brewer’s ability to not foam up due to Co2 degassing. No problem there, but the flavor was still bad. A Mocha Java from Salt Lake City’s Caffe Ibis, a great blend by the way, was just lost on this brewer. I know what both these coffees are capable of, so it was doubly disappointing.

I repeated brewing using the four cup setting. I put twenty-four ounces of water and 36 grams ground coffee and then pressed the four-cup button. The instructions promise “double heated” water. This double heated concept may work on paper, but it seems to generate just slightly earlier hot water, and the water never gets hot enough, reaching just short of 192 five minutes into brewing. The four cup setting gives a seven minute brew cycle, still long for manual brewing, but within reason for contemporary electric drip. Due to the very low early water temperature there was not evidence of bitterness in the final brew. It was actually decent tasting, but again with very little cup sparkle that a fine coffee maker would resolve. I used the same two coffees and each was better, but still far short of their potential.

Conclusion — Who tasted coffee from this machine before they brought it to market? Did they really bring this to a conference table, the executives tasted the coffee and they all shook hands and high-five’d each other. It just goes to show there’s no brand consistency. The grinder is great. Get a different brewer. If you do own one, I’d always try to use the four-cup setting, where at least a decent cup is possible.