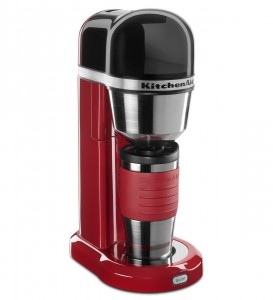 After a couple of no hitters, Kitchen Aid knocks it out of the ballpark with this one! Makes great coffee, attractive and flexible.

It seems everyone wants a personal coffeemaker. A few years ago I recall going to the International Housewares Show and seeing a few machines trying to be K-Cups without infringing on their ironclad patent. Now, every manufacturer has a horse in the single-serve race. Most of them are the opposite of a manual pourover such as the Hario V60. Most are mediocre at best, as is the Keurig’s original K-Cup. They underextract because they try too hard to be fast or their puny heating elements can’t get the water hot enough to extract coffee’s precious oils efficiently.

The KitchenAid Personal Coffeemaker is their entry into this competition and I am delighted. It does almost everything right and nothing wrong. Let’s look at each feature and then its measured performance.

1-4 cups! Most single serve machines are just that… one cup. The KitchenAid offers a range. Although it’s listed as a three cup, I was able to fill the water to maximum and get four full (near) five-ounce cups. This is just about perfect for me and a friend, three friends if we each want one cup. It’s easy enough to brew again if we’re really thirsty.

The KitchenAid Pers0nal Coffeemaker brews into a supplied to-go travel cup with a tight fitting lid, which doubles as a carafe. This shows their awareness of the market, because likely lots of folks are making their cup to travel. The personal brew size can be between six and 18 ounces. I always brewed maximum and I think you should too. I’ll tell you why in a moment.

There is a permanent gold filter, one that’s dishwasher safe.

The water container is removable. I couldn’t care less about such things but you may and it does make it easier to fill at the water tap.

Now to the tests: I always made a full batch. It is because drip makers are optimized for a certain grind and grounds-to-water ratio. At maximum fill the brewing contact time between water and the coffee grounds will be six minutes. If you brew less, that time shortens, and so does the strength unless you play with the recipe or the grind. Possible, but I say learn to make it one way and stick to it.

Most coffeemakers do not get the water hot enough. The Kitchen Aid single serve gets the water to 195°F, or higher. It takes about a minute to reach altitude but once it does, it stays there. The full-size Technivorm KB741 is ruler flat 200° but the KitchenAid is close enough that most of us won’t care and it shows you the company this one keeps.

Another failing of many drip makers is the ability of the showerhead to thoroughly and evenly soak the grounds beneath it. This means a lot because dry grounds don’t give any flavor to your cup. You waste fuel as they say in Car and Driver. If you use the kind of coffee I used to test this brewer, such as Dark Matter’s Cup of Excellence Colombian, you will see how important it is to realize the value of your coffee through thorough extraction. The Kitchen Aid is among the best automatic drip machines yet tested in the ability to soak the grounds. It is as good as the full size Bonavita, which leads in this category. Both it and the Kitchen Aid beat some other highly rated and costlier makers.

The brewing contact time is critical because your cup’s flavor depends upon exact extraction. When people complain of bitterness in their coffee, it is most likely due to a too-long contact time. The Kitchen Aid accomplishes its mission within six minutes. This is perfect. Shorter risks underextraction and less taste and even potential sour notes. Longer risks bitterness as I wrote above.

I know some of you are saying, “Kev, I have a Keurig and I have an insert that takes regular coffee. How is this new KitchenAid better?” Fair question. Even assuming the K-Cup King met the other parameters of time, temperature and water contact, the Keurig and in fact all K-Cup machines use a non-standard grind, an extremely fine one. It’s the only way it can give a decent extraction within the comparatively short contact time and meager grounds-to-water ratio. It’s hard to match, assuming your home grinder can do it at all. The KitchenAid Personal Coffeemaker uses a standard automatic drip grind. To me, it’s a no-brainer. And my tests confirmed the quality that went into KitchenAid’s design.

In addition to the great tasting Cup of Excellence, I tasted Jim’s Organic Coffee Wonder Brew blend. This is a darker than normal roast for me, but Jim did a nice job turning out a roast that can be described as syrupy but no over-roasted notes or excess caramelization, common side effects of darker roasts. I tried some of Counter Culture’s Banko Gotiti Ethiopian Yirgacheffe.  My friend Rich Futrell recommended it so highly and it was the end of bin so I grabbed it. This coffee is a floral bouquet and it will taste good in almost any decent machine but a great one will give you the fruit in balance with the body. Otherwise fruity coffees can easily taste unbalanced to me. The Kitchen Aid acquitted itself admirably, producing a cup right on part with the previous day’s Chemex of the same bean, quite a feat!

Glutton for great coffee that I am, I happened to have another Ethiopian Yirgacheffe from Metropolis on hand to research some summer coffees to recommend to Men’s Health Magazine’s Diana Stanczak for a coffee article she was writing. This coffee is almost as bright as Counter Culture’s Banko Gotiti, and to be honest, I wondered if I’d be able to discern a difference between two same-region coffees in an automatic drip machine. The KitchenAid Personal Coffeemaker brewed batches that exhibited some subtle differences, likely as much due to roasting differences as their growing and processing distinctions. This was actually the test that proved to me more than any other how fine is this brewer.

The KitchenAid Personal Coffeemaker is a winner. This is the machine I’ve been waiting for since their legendary four-cup, long discontinued. If anything, the new one is superior. The four-cup never attained the same brewing temperatures.

KitchenAid knocked it out of the ballpark with this one. Highly recommended.