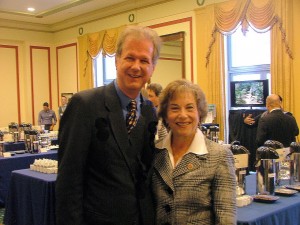 Congresswoman Jan Schakowsky D-IL, Event Sponsor and I grab a cup and chat about, what else? CoffeeCon 2014!

During the recent National Coffee Association Summit in Philadelphia, I discovered the NCA planned a one-day coffee event for Congress to help bring attention to coffee and coffee issues.  The NCA’s Donna Pacheco seemed to have everything planned, but when I volunteered she graciously suggested I might be able to discuss coffee with the Congressional staff who attend.

The issues in coffee are pretty straightforward. I think most everyone shares them. NCA CEO Robert F. Nelson would probably say the coffee industry wants to be more or less self-regulating, like the cosmetics industry. Doesn’t it make sense that the folks who know the most about how to proceed are those closest to the situation? How much labeling do we really need on one of the world’s oldest products? Think of the apple (fruit, not iPod). Do you really need or want nutrition information stamped on your apple? Is it worth the cost? And coffee, with things like caffeine content varying widely depending upon variety and roast, would impose an entirely new cost on the roasters, which of course hurts the smallest guys most. Does a centuries proven safe beverage like coffee really required to be treated like a laboratory-fabricated energy drink?

Also, how about some immigration reform ala coffee? Isn’t coffee that’s brokered, stored, roasted and brewed in the US entitled to be called Made in USA? These are issues the industry wanted to get across. I decided my role was best served by listening and observing first. Second, if asked I would talk brewing and consumers. 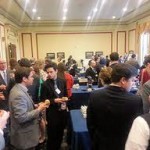 I did wish to stump for more relationship building from seed to cup. I can’t think of a more potentially useful group to help with this than the State Department, who is charged to look for ways to improve communications with our neighbors, many of them coffee producing nations. CoffeeCon’s mission is to build a kind of “farmstand rapport” between U.S. consumers and their favorite coffees’ farmers. I know it’s possible. In CoffeeCon v.1 I recall posting on Facebook, offering a free booth to any farmer able to make the journey to Chicago. Honduran farmer Gerardo Casco came and exhibited and spoke to our attendees. It adds a global dimension to CoffeeCon and closes the loop from creator to consumer many in the industry speak about.

Coffee On the Hill (I know I keep calling it Coffee For Congress) was well attended. More than 500 shared coffee with us. The top-end coffee Barista Guild Chair Trevor Corlett and his fellow Madcap colleague Ryan Knapp ran out of the Cup of Excellence coffee they brought – I take some blame for this because I kept touting the coffee and downing several servings myself. Beans wise, I can’t help my own affection for John Martinez’ Honaunau Estates Kona Coffee beautifully represented the best of U.S. grown coffee. 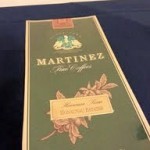 Steve Schulman of S&D Coffee brought enough of their coffees for a representative world flight that featured some genuinely rare breeds, brewed with Bunn-supplied brewers, all organized and brewed to precision by Bunn’s Debbie Russell. There were also cuppers who set up stations from Coffee America (USA), Corp., Massimo Zanetti Beverage USA, and Noble Americas Resources Corp. They are to be commended for bringing the high degree of professionalism. Frankly, I didn’t expect to see replicas of coffee evaluation that trade uses. It added a nice Mr. Science touch to the proceedings. Note to self: See if these guys will come to CoffeeCon 2014.

As you can see in photo 1, I met Congresswoman Jan Schakowsky, D-IL who sponsored the event. She’s asked if I can bring CoffeeCon to her district, and of course the answer is a solid… maybe – haha, I learn fast here! I also met Congressman Darrell Issa, R-CA who of course is politically opposite of my Illinois Congresswoman. Typical of elected officials I’ve met, both were charming and engaging. I met many congressional aides, who all wanted to know which brewer, how to use it, and what my favorite coffee was. I spoke eloquently on the first two and diplomatically, even evasively on the last. Which coffee is my favorite? Hmmmm. (I told you I wished to show myself a fast learner. haha.)

I believe the event was a success in all ways. So, to answer an obvious inside joke: Did we energize Congress? Hmm. Let’s just say they left energized. Certainly it was great fun.

PS: Special thanks to Joe De Rupo, National Coffee Association Communications and Media Director for making it so easy to attend their events, and for snapping my photo with Congresswoman Schakowsky.