Conan’s Coffee Clip: Did He Nail It or What? 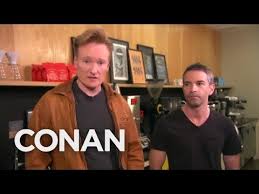 By now, everyone has likely seen the Conan coffee clip where his coffee snob employee snubs an Intelligentsia espresso. Don’t worry. Intelligentsia is laughing all the way to the bank, as the snub gave them an opportunity to put the dissenter in his place. Meanwhile, it warmed my heart to see coffee given its minute of fame (actually eight minutes of good air time). There were some genuinely funny moments in it.

Conan O’Brien is among my favorite on-air comics. He plays his everyman role well. Jordan Schlansky, plays the dour office coffee snob to perfection. An unfortunate side effect of becoming a connoisseur in any art appears to be the loss of humor, and he characterizes it nicely. This is all good. But, what, if anything did the segment accomplish in teaching a mass audience about coffee?

Single origin versus blends – Jordan points out that he prefers a traditional Italian espresso over the single origin American one prepared on camera by an Intelligentsia barista. Most Americans probably know that Starbucks did its own version of espresso, but likely some learned for the first time that the latest round using one coffee type is still very different from the original drink.  Jordan made a point that traditional espresso almost inherently contains both Arabica and Robusta coffee types, a blend which he thinks tastes better.

Roasts – After warming up by questioning the use of a single origin over a blend for espresso, Jordan challenges the holy grail of the Third Wave – its roast.  He taunts Sam and Eden, the two Intelligentsia employees by attacking their light roast’s suitability for espresso. Sam points out that they chose espresso since Jordan stated it was his interest. One of the things I like most about Third Wave is its return to brewed coffee to strut its stuff. I wished they’d brewed using a Chemex or Hario, myself. But, it’s a fun and still informative bit.

Brewing – Jordan finally takes issue with what he identifies as over-filling the coffee machine with grounds, creating a too-strong coffee, versus his nostalgia for a more pleasant (if weaker) 7 grams per 25 ml water (traditional espresso shot). He is here, in effect, really attacking the Americanization aspect of Third Wave espresso. Here, the Intelligentsia on-air staff, who do an overall admirable job keeping straight faces in what must have been a high-tension situation (all of professional coffeedom’s eyes were no doubt on them) had one of their lesser moments, in my opinion. Admittedly it’s a tough theological coffee question (I’m not sure who could have really answered it better) but when basically asked if their coffee is too strong, barista Eden answered that they have determined the strength using scientific measurements. Her words: “What we are looking for is the proper amount of extraction for each coffee particle”. Jordan retorts, “By whose criteria?” I know this is supposed to be fun, but in my opinion, this is a key question, one I hope resonates with the industry’s leaders, who should really be careful before they use numbers as arguments. In other words, it all really still starts, not with science, but with someone’s opinion. While I believe this is really how it should be (and in reality, must be), it should serve as a deterrent to the idea that somehow anyone has a definitive lock when it comes to these numbers. Meanwhile, to get consumers to even think about measuring a recipe is definitely good.

Third Wave identified – Just as in the 1960s most kids nationwide learned the Southern California surfing jargon in the Beach Boys song Surfin’ USA, there may be a million TV viewers who learned the term Third Wave for the first time in this segment, as well as got at least a partial definition of what it means. I refer of course to the description of coffee growth in the US (and elsewhere) as split into waves. First Wave (as I understand it) refers to the general explosion of a culinary coffee market after it was discovered that beans given extra farming and grading attention were special and the term Specialty Coffee (credited to San Francisco coffee importer Erna Knutsen) was coined. Second Wave is often given to Starbucks, Peet’s and other roasters’ emphasis on (darker) roasts that called attention to the roaster, with an emphasis on espresso extraction. Third Wave became a popular term (I heard it first from legendary coffee pioneer roaster George Howell) to describe single-origin coffee roasted (usually very lightly) to emphasize its origin characteristics at the expense of roast development and (in the extreme) any hint of caramel flavor. The best part of Third Wave coffee (to me) has been the emphasis on brewing, often using manual devices, and a return to filtered coffee over espresso as the preferred extraction method.

Identifying and introducing to mainstream conversation the term Third Wave might be the anthropologist’s desert. I know it made my heart skip! Having consumers learn what the heck some of this means, arguments and who’s right aside, is good for business. It does more to give people an understanding why they’re lining up and waiting ten minutes to get their morning coffee at Intelligentsia (and others) each day. Yes, there will be some who will have an epiphany that they really don’t like what they’re getting and may switch back to something plainer. But, there will also be water cooler coffee talk at work. Some will try the coffee minus cream and sweetener (Intelligentsia does offer it, as do most Third Wave coffee environs). Some will become super elitist and seek out the traditional espressos (ie: Bay Area’s Mr. Espresso) and decide for themselves. The important thing is they will have their coffee consciousness raised. And, yes, they may start questioning the standards, realizing that their own taste buds are entitled to be heard in the quest for the perfect cup.

If this was supposed to be a debate, I think everyone won, with Jordan winning some surprising points, no doubt in part because as a performer he was less nervous, but also because he was able to slip in some genuine questions many of us are asking, and I am overall a fan of Third Wave Coffee. Intelligentsia’s Sam Sabori and Eden-Marie Abramowicz handled their parts with aplomb and they were good at advancing their company’s image without themselves seeing too snobbish. It’s hard to be on the spot and they were really playing themselves, not roles, a far more self-conscious circumstance. The heat was on, and the TV people are always going to win, as Bill O’Reilly, Jon Stewart, Ellen DeGeneres prove each airing. Conan O’Brien himself, really played the straight man, giving his fellow player the main character role. Points were made, I think in the consumer’s behalf.

A glance at social media since shows the industry saying how important it is to get the word out there. I  hope behind closed doors they are also saying they need to listen to consumers, mainstream and also informed ones as the segment’s Jordan Schlansky, who I continuously find are raising questions about coffee. I keep saying the industry needs a healthy combination of leading and following consumer tastes. Most industry professionals would I think agree with this. There really are some high-end consumers out here who are as knowledgeable as the trade professionals.

Kudos to all who created the segment, and especially to the Conan O’Brien Show. They really gave coffee a boost in this entertaining segment.