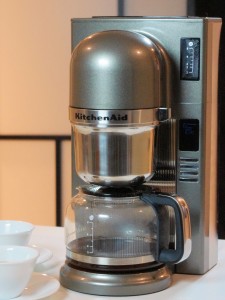 KitchenAid’s new 8-cup automatic drip Coffeemaker is proof that appliance manufacturers now take coffee making parameters as seriously as they do any culinary art. KitchenAid has long been a coffee innovator, with high build quality and within reasonable price points. This new model has literally been years in the making.

I visited them during summer 2012, during which time their four person design team held a therapy session, where I lay back and told them everything missing from most coffeemakers. Just kidding about that part, but suffice it to say, I left feeling unburdened and they went to work building it.

Sure enough, they brought it to this year’s CoffeeCon San Francisco and Los Angeles events. I recall making a beeline to taste a cup. It was good enough that I requested a model for my long-term at-home tests, from which I made review judgments.

• Pre-infusion stage. It dribbles a small amount of water, pauses to allow ultra fresh coffee grounds to get wet and exhale their carbon dioxide.

• Intermittent brewing throughout the brewing process, just like you instinctively do using a manual drip coffeemaker. We’ll talk more about this in in a moment.

• Two brewing temperatures. A higher one is just over 200°F, and optimized for lighter roasted (most Third Wave) coffees. The second, lower temperature setting stays under 200°F and is optimized for darker roast coffees. It’s up to you of course, as it’s so cutting edge that there’s hardly consensus on this subject. Suffice it to say, it’s amazing to see a big brand acknowledging the standards and then going a step further by offering you a choice of two brewing temperatures within those standards. Again, this is sophistication on par with manual brewing geeks.

• Perhaps the biggest news is that the KitchenAid meets SCAA (Specialty Coffee Association of America) brewing guidelines, which are stringent. This means a temperature spec (range: 196°-2015°F), within the given drip time spec of 4-6 minutes.

• Cup number setting. This at least promises to be an attempt to prefigure brewing algorithms so you and I don’t have to. More later, but this just might be their most important feature – if it does what it I think it promises.

First, let’s get this out of the way at the start – most so-called automatic drip brewers are one size brewers that are, by modern standards, not very automatic. If you make a full batch, they do well, maybe even very good, but most coffee enthusiasts eventually discover a manual coffee maker makes better coffee, since you have to figure out each parameter. But still, there’s a need for an automatic maker, because everyone, myself included has something else to do other than make coffee. It’s easy to operate. Just choose your cup setting. I had to get used to it, but the first thing you must do is select your desired cup batch size, but pressing plus/minus buttons. Then press whether you want light or dark roast (higher or lower brew temperature). Then hit brew and you’re ready in ten minutes, no matter what batch size.

How did it do in my tests?

Pre-infusion – The KitchenAid does really do this, but it’s still a best guess. As everyone who brews with manual drip brewers knows, this time varies depending upon how fresh your coffee is. KitchenAid designers chose a reasonable pause. It won’t please everyone, but in my tests, it did a good job of allowing most grounds to rise and fall, and then repeating this drip, pause, drip sequence throughout. Only at the 8-cup setting using extremely fresh roasted and freshly ground coffee did I get any foaming that left residue at the top of the brew basket (near showerhead). Most times it was not a problem.

Intermittent brewing – Part of the benefit of continuing to drip, pause and drip throughout the brewing is let all the water drip through before pouring more water onto the grounds. It seems to achieve a better, more thorough extraction. The KitchenAid did not disappoint. I’m sure there are some that will say their manual drip pours are better still, but for many, this brewer will deliver everything they want from their coffee.

Cup setting – Many don’t realize that every automatic drip coffeemaker is optimized in contact time for one size batch. Larger batches will take too long, resulting in bitterness/excess strength; smaller batches mean faster (too fast) contact times and resulting weaker brew. This is simple math. If you baked a half batch of cookies and shortened or lengthened baking times, you wouldn’t expect them to taste right, would you? All drip makers, even manual ones have this challenge. KitchenAid seems to do some adjusting of the drip rate inside to accommodate the changing times, so it lessens it. I’d say they’ve make it work overall. The batches I made between four and eight cups were all between four and six minutes in overall contact time (this spec does not/should not count the time the water is heating with no contact). At the two cup setting, the contact time was not long enough. Keep in mind the cup quality may vary between 4 and 6 minutes contact time, but overall I was satisfied.

There are little tweaks you can try such as grinding a notch finer for fewer cups, or simply upping your grounds to water ratios a gram or two. I’ll leave it to others to explore these options. I settled on 6 cups for most of my tests over a month’s use and found it delivered excellent coffee at all settings between 5 and 8 cups, coffee on par overall with my manual drip brewers.

A couple of extra notations:

• The KitchenAid coffeemaker’s sound is quieter than most other automatic drip coffeemakers and its sound is subjectively nicer.

• KitchenAid is to be commended for offering detailed grounds to cup measuring recipes in their well-written instruction book.

• The water input at the KitchenAid’s top is too narrow for my tastes. I occasionally spilled water while filling it. Maybe it’s just me.

• I routinely filled the water tank exactly to the intended batch cups mark, and found the resulting brew on the carafe at brewing’s end was frequently less. I realize this may be caused by steam loss, but I found it works better to always overfill above the water mark.

Here are a few taste test highlights: I was fortunate to pick up a sample of Martin Diedrich’s Kean Coffee at CoffeeCon L.A. It was a slightly darker roast than most Third Wave roasts, and, (gasp) in my opinion, the better for it. It really shined, especially with using the lower (but still SCAA-approved) temperature setting. This kind of coffee really has that chocolate taste (cliché though it seems) and that temperature just seemed to highlight it.

Another treat was Counter Culture’s latest Ethoipian in a new package. This one really called for the higher temperature, but fully matched my expectations, with a fruitiness and acidity this coffee brewer brought forth in all its glory.

A surprise hit of CoffeeCon LA’s roasts was Temple Coffee’s Panama Geisha. Oh my Lord! What a coffee!! I did two batches concurrently. It was so good I went past my limit. The high temperature was my preference, but it did splendidly (albeit differently) in each. Note: I found a perfect formula for me was to make six cups, using 50 weighed grams of beans, medium-fine grind. The slightly less than full batch allowed even the freshest coffees to brew properly, and gave us a perfect way for Pat, I and a friend each have a couple of cups each.

The KitchenAid 8-cup is highly recommended.