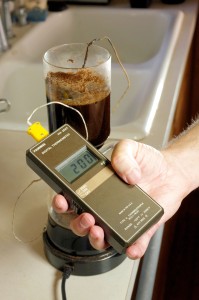 I realize this article will be read mostly by coffee enthusiasts already so involved in brewing that they likely have their own views regarding brewing, and its three most important variables: time, temperature and grind particle size. But, lately there’s been dissention over what for many years appeared to be consensus among the trade. As brewing as an art and craft (hence my book’s title) has developed, there are those who question the basics.

Questioning the basics is, I think, a good thing. Anyone who’s been in family counseling knows it’s a healthy thing to revisit how you divide labor. When it comes to processes, it’s a good thing to reconsider the variables. My observation is that coffee brewing is still being analyzed. Don’t forget that as roasts, types of beans, brewing methods and consumer tastes change, it’s a good idea to do a few experiments. If they confirm the basic parameters, so be it. But, they may not, and why keep doing something wrong?

Historically, much coffee was boiled. I can think of all kinds of reasons for this: pre-chlorination food safety, ease – the bubbles tell you the water’s ready, and thrift – the cheapest way to maximize extraction strength is to use the highest temperature.

The Coffee Development Group, or was it the Pan-American Coffee Council – some predecessor to the Specialty Coffee Association of America (SCAA), did extensive testing, using food experts, not just coffee folks, which resulted in the standards that have been in place for many years.

They include:
• Grind size specifications, basically finer for short extraction times, coarser for longer ones. The current challenge with enthusiasts likely to grind at home, is how to confirm this. It used to be written right on a coffee can.

• Brewing Temperature – It’s easy to tell consumers: “Under Boiling”. Everyone seems to get that now. The last percolator I came in contact was in my late Aunt’s estate sale. BTW, 195°-205°F just tightened to 196°-205°. The extra degree may or may not matter to you, but according to my little birds, the US and European specialty coffee groups wanted to share the same standards for a variety of reasons.

• Contact time – In my observation, this is the one most difficult to control, partly because it’s so difficult to measure, especially in intermittent drip methods. Ever tried?

Recently, I’ve run into a number of enthusiasts, baristas, brewer designers, who complain like music composition students do about tonal scales. Recently, I was sitting in the office of one of the most influential big-coffee business owners, who many would say personifies the word establishment and he told me he believes 200°F is too high a brewing temperature. I’m sympathetic. After all, what kind of thinker would I be if I didn’t like to challenge rules? “Question Authority” – That’s my bumper sticker!

But, I’m here to re-commit CoffeeCompanion to following the rules, at least for now. We need some kind of reference point, or a dialogue is useless. The fact is that a great number of culinary experts were consulted in creating the standards. These folks had taste buds. This wasn’t a casual industry lock down for convenience.

I will always challenge the established rules. I will also follow the standards and use them for my tests. I may expand my tests in certain instances but I will always strive to identify those instances.

Meanwhile, I urge those of you who are doing your own home experiments, playing with brewing parameters to customize your methods to your individual tastes, a worthy pursuit even within the parameters, to start off following the standards. If you decide your Chemex or Aeropress tastes milder, better straight (minus cream or sweetener) when brewed at 180°F, no one is going to take the children from your home.

But, as my music theory teacher said to us in college, “Learn the rules so they can be broken by design, not ignorance.”

We are living in a golden age of brewing. There are all kinds of new brewers, the re-discovery of old ones. The profession of barista confirms that the industry gets that how its coffee is created in a coffee establishment makes a difference. Remember: Wine tastings don’t need bartenders, but coffee tastings need baristas.

CoffeeCon, my ‘lil ol’ coffee show is great fun, but I have an agenda as plain as Karl Marx at a school board meeting. I want consumers to discover coffee as a culinary art and invest the same passion they do into cooking into brewing their coffee. Anyone can do a coffee tasting. We are a coffee university.

So, just FYI, I will keep taking any coffeemaker’s temperature, use a stopwatch to check how long it subjects your (ever-increasing-in-cost) ground coffee to hot water, and play with grind and include those results in my reports.