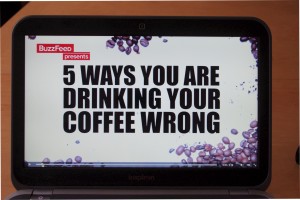 I saw a video clip purporting to fix coffee problems online this morning. I have a few thoughts about it. Of course, the problems depicted are genuine, well most of them. But are their fixes good, effective ones? Here’s my feedback.

1. You Pour Out Leftover Coffee – Freeze Your Old Coffee in an Ice Tray – The concept of freezing coffee to make ice cubes is genuine, and I’ve been recommending it myself for years. When it’s old, however, it’s no longer a good idea. If the coffee is more than a few minutes old, and it’s been either on a warming plate, or in a thermal carafe, don’t do it. If it’s been in an unheated open vessel, and it’s been allowed to cool naturally, great – do it. As far as adding milk and instant latte powder to it later, um, I wouldn’t. But, that’s just me.

2. You power through bitter coffee – Instead they recommend adding a pinch of salt to deaden your taste buds. This is akin to taking off your glasses when you rent a bad video. Why watch it, as I’d say why drink coffee if it doesn’t taste good. The fix for bad coffee is to learn to make it better. As far as the salt solution, wine merchants have known this for years, which is why they feature cheese at tastings. I lost a lot of respect for Alton Brown, who recommended this. Even his nerdy looks couldn’t save him in my mind after this cooking expert recommended a way to deaden your taste buds while tasting.

3. You drown your coffee in sugary flavoring – Instead grind in some natural flavor. Cinnamon, orange rind. I fail to see a philosophical distinction to this fix – what was the problem again? Hmm. Oh, if you want to add flavorings as a culinary experiment, there’s nothing wrong with ito of course. But tossing anything, but coffee, into a coffee grinder taints it forever. That’s a high price to pay, for you and everyone else. So, just so you know there’s no going back after this, truly.

4. You add cold milk to coffee – Then they show a 30 second shake/microwave. Good one, actually. Kudos, although part of the reason people add cream/milk at all to coffee is to lower its temperature to increase taste, to go from scalding the taste buds to being its most savory drinking temperature. Otherwise, rather good.

5. You drink old coffee – Use two old foam cups to track when coffee was made. Ok. Not sure why two are needed. They also show a Mister Coffee machine I tested that’s coffee was what I’d label as “out of service” when it was fresh made, but that’s another article.

1. Learn to brew better coffee. Is your coffee fresh? The water good? The coffee maker clean?

3. Toss our remaining coffee after 30 minutes. If you are doing this too often, replace the brewer with one that makes what you consume within 30 minutes.

4. Buy coffee that tastes like the flavor you wish to drink. Buy it from a place that samples. You’ll be surprised that many of the world’s coffees have different flavors due to their geography, climate and agricultural care and feeding. How they are roasted makes a huge difference.

5. Choose a brewer that makes coffee the way you like it. A Hario manual drip and a French press are both good methods, but differ vastly in their output in your cup. Even a casual drinker would easily tell the difference.

Instead of fixing bad coffee, I propose making and drinking only good coffee. It’s not that hard.