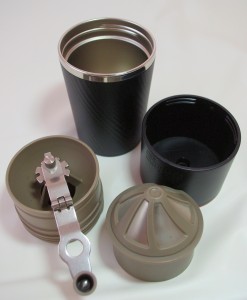 We need a traveling coffeemaker. It may just be a romantic thought, but it’s as if coffee enthusiasts are always planning to travel and don’t wish to be way from a favorite method, or at least the ability to brew coffee at their same usual high standards. In this spirit is the Cafflano Klassic designed.

There is also a need for an at-home or at-work one or two cup brewer. Every morning I brew a larger batch, but there are times during the day when one person wants a cup of coffee. I tend to make a cup at four, and I usually offer one to whomever I’m with. The Cafflano Klassic fills this bill nicely as well.

First, it is designed much like a thermos. It resembles the one you had as a kid to keep your milk cold. It completely screws together. You can easily place it in a suitcase, or toss it into the trunk of your car and know it will arrive still-assembled. Second, it is truly a coffee brewing system. It has everything you need to make coffee, except a water heater. More on that in a moment.

The operation is simple and intuitive. If you remove the top cap, that appears to be a water boiling vessel. Directly underneath is a hand-operated coffee grinder. Remove the grinder and you have a metal cone filter, and under that, is the coffee server. You literally make coffee by performing a striptease. Haha. Not really of course, but it is a nice, simple design.

Now, that top lid. While it looks like it is a kettle, you’d fill with water and pop into a microwave, its designer quickly corrected me when I asked about it. “While it is BPA Free, we would be concerned about possible molecular restructuring a microwave might perform and therefore recommend an external water kettle to heat your water. I respect their forthrightness and the purity in their view, but I must say the top cap even has what appears to be an exit hole to pour water over the grounds, but since it works against any claims of complete self-containment, I respect them for this. 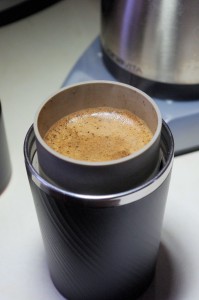 Note: I received a prototype. Its designers told me that the production model will be improved, if anything.
Operation: Simple, intuitive and hot

The Cafflano Klassic is intuitive. You operated it by taking it apart. You can place it on a scale, zero it, and add 20 grams of coffee beans. Grind them, remove the grinder and they’ll already be loaded into the screened drip filter, stored below the grinder. I feel this is a key to this brewer’s greatness, as it removes any complexity which could otherwise drive an end user to other less-capable methods.

Then, you simply add hot water in steps, just as you would in any drip maker. I tweaked the grinder until I got a six-minute start-to-finish contact time between the water and ground coffee. The closed design meant that finished coffee was quite hot, on par with that of an automatic drip maker, which is a good thing. I received an urgent phone call during one test; it was ten minutes before I got back to drink my coffee. It was still piping hot. The built in grinder is also an important part of the Cafflano Klassic’s gestalt. It would never occur to anyone to use pre-ground coffee. It’s assumed, which is as it should be.

Some may ask: “How do I set the grinder?” I simply moved it by notches until I found it took six minutes for the coffee to be brewed. This is the ideal contact time for a drip coffeemaker. If you like it a little less strong, move it another notch coarser. I like the notches. I have a Zassenhaus manual hand grinder and, while it does a nice job and its mechanism is fine, it has a free-floating adjustment screw. It drifts and for something as important as a grinder, I prefer a locking stop, such as the Cafflano Klassic features.

I used a recipe of 20 grams weighed coffee per 12 ounces of water. You will want to use a kettle, empty it and add the exact amount of water to boil, because you can’t see into the plastic reservoir. 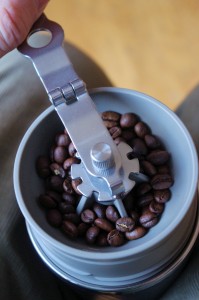 This is just a wonderful product. It does exactly what’s promised. It has a true, high-quality burr grinder. The torque, or balance between how often you must turn the grinder and its resistance while turning, is well proportioned, so grinding is less of a chore. The brewer’s design keeps the coffee enclosed and hot as it brews. The permanent filter is well made and filters all but a slight amount of very fine grounds, just enough to add a slight cloud to your coffee. I think most people will simply see it as a sign of thorough extraction and getting all the flavor in their cup. Fit and finish is first rate.

A couple of outstanding tastings:

Gorilla Coffee El Salvador La Esperanza – an old-growth bourbon coffee from one of the new hot NYC roasters, this coffee claims are cashew and red plum. I got a distinctively citrus note of some kind, but cashew was the furthest thing from my mind. However, the roast for a drip coffee was just about perfect. And the Cafflano Klassic just brought out the essence of that roast in spades.

Hapuna Espresso Blend – Surprise of the tasting, as I took the label too literally. This blend gave me one of my favorite taste experiences with this the Cafflano Klassic brewer. Kona, African and Indonesian beans roll into a delicious coffee cocktail.

Broadcast Coffee Roasters Guatemala La Hermosa – Honeysuckle, Milk Chocolate and Strawberry notes abound. The brewer just nails it. I got everything the roaster claimed it would have, and more.

Conclusion
This is the hardest kind of review. Everything works as planned. It’s a brewer that you will want to have for travel, for the afternoon one or two cups. Everything’s laid out so intuitively you won’t need to read the manual.

Cons –
• Must be carefully cleaned afterwards
• Not truly independent – you need a third-party water heater
• Manufacturer made water boiler half from safe, microwaveable plastic, but still doesn’t recommend it.
• Need to measure water volume in advance of brewing. You can’t tell how much water is enough.