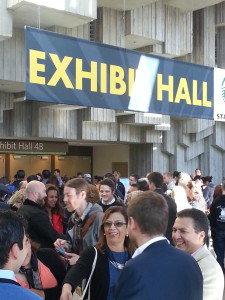 I keep saying we’re living in a golden age of coffee brewing. This year’s Seattle SCAA Event brought more brewers. There are even a few coffee discoveries to report. Here are some highlights:

Nick Kohout of Arcaia showed me some scales that, frankly, did not impress me at first. I mean, they supposedly have some higher-end parts than comparable Bonavita scales, but does that excite anyone? I’ve had no problems with any Bonavita scales, not that I’m a barista, but I’m just being honest. Then he showed me how its timer keeps track of the contact time in manual brewing. Apparently, it detects when the water has gone through the grounds, and pauses the clock.  Now I am excited! Their goal of connecting folks via the web so they can meaningfully compare their brews is also a step in the right direction.

Lots of new coffeemakers, some Kickstarter projects and others already developed and seeking coffee stores to recommend and sell them to customers. Gregory Bombeck’s Phoenix coffeemaker was one. Another was the Kinto coffeemaker from Japan. Saint Anthony Industries has one of the most beautiful cold brew makers I’ve yet seen, although the whole cold brew thing leaves me… oh, I won’t say it.

My own personal favorite was from 21 year-old Cameron Hughes of Invergo Coffee, of Garden City, New York. His brewer’s patented swiveling spray head may have cracked a problem that’s plagued automatic drip makers since George Bunn introduced the first Bunn-O-Matic in the 1950s, and that is how to effectively mimic the way you and I pour water so beautifully by hand. He also claims you can set the brewing temperature, not revolutionary, but makes me want to test his machine in my kitchen. My at-show tasting was compelling however. Remember, Orson Welles was twenty one when he became famous in radio. Post-moderns may prefer a Beatles analogy. 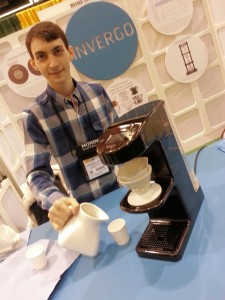 At the Remarkable Indonesia pavilion, they were tasting some interesting coffees. It’s no secret that I’m a fan of this country’s coffees. The flavor diversity is astounding, and I can only assume that it’s distance and the fact the only a select few green buyers (think Geoff Watts) ever makes the trek (20 hours-plus) to actually visit. My personal taste favorite was Bali coffee. I admit I have a guilty pleasure for some of their robusta varieties as well. But the news this year was their showing clips of a new film, Aroma of Heaven, created, written and lensed by cinematographer Budi Kurniawan. Budi K, as he introduced himself, is almost as interesting as his film. A compulsive shooter, he had a camera in his hand both times I’ve seen him. I predict this film will be a big hit among coffee enthusiasts. It deserves special mention for being the first film to not seem like a colonialist perspective, but rather an honest, if not bitter, but also not candy glossed look at coffee. Indonesia goes pretty far back in coffee history, by the way. Budi says a download is going to be available, but I’m pitching for some neighborhood showings (I know someone at CoffeeCon hehe). It’s a remarkable film, and thanks to a screening of it in entirety) I speak with confidence.

I’ve been trying to track down Breville products for reviews for years. Fortunately, a changing of the guard has opened transparency and Category Manager Alejandra Lin has pledged to get us some of their products that are promising. I’ve heard good things about their grinders, but talk (especially about grinders) is cheap. Let’s get one and do some measurements, which is what matters. Breville really had something that caught my attention. Alejandra told me their automatic drip maker has the ability to modify its contact time according to volume. As you may know, most automatic drip makers’ contact time between the grounds and hot water is optimized for one specific cup size, usually, but not always, the maximum. Make more coffee, it’s too strong/bitter. Make less, it’s weak/undeveloped. If the new Breville machine delivers, it will be front page news (here anyway!).

The show surprise was this new stovetop coffee roaster. Jung Park of Dr Mahn Coffee brought his new design from Korea, which seems to be experiencing a coffee renaissance of new innovations. Can’t wait to try it, remembering both the 1990s Palani Pan roaster and the importance of a kitchen fan when roasting over fire. What this country needs is a simple professional quality sample roaster on par with the classic Siemans Sirocco coffee roaster long out of production (spotted one last week on eBay, which was snapped up before I could say “Buy it Now”. I think I may have found it. Luke Kawa of Kawa Coffee had one, which is also extremely attractive, but how it roasts will be what interests me most, of course.

Remember a Netherlands company named Bravilor? They used to be distributed by Boyds. I always thought of them as a commercial version of Technivorm. They are about to introduce a consumer automatic drip coffeemaker. Seemed very robust, but not coffee samples at SCAA. Might be ready by CoffeeCon Chicago in July, according to Eric Covelli, Bravilor Marketing

VP. Had a delightful dinner with Kenneth Davids, famous author of many books on our favorite subject. One of our topics was the current Geisha coffee craze. According to Professor Davids, there are genuine attributes to the Geisha cultivar. One such sample (roasted here in Chicago by Big Shoulders) earned a whopping 96 rating in a recent CoffeeReview.com tasting.

Bonavita had their latest 5-cup maker and many other products on display. They’re an amazing coffee maker success story. I’m particularly interested in this size category because as more people buy specialty (read: expensive) beans, they’re going to take a closer look at over-brewing those twelve cups, when they each have a couple (read: 4). Marcus Boni assured me a sample will be sent and, of course, a review will result.

Jim Shanley is a farmer with a unique geographic location. He’s in California and his farm is aptly titled, California Coffee Farms, the first I know of in the continental 48 states. Hopefully I will try some soon.

Robin Thorum spoke to one of my favorite subjects, testing grinders. Mr Thorum’s company has done a lot of research on measuring irregular objects such as coffee grounds. According to him, laser measuring tools presume all ground particles to be spherical, which would be nice, but anyone can see this is not so. Ditto traditional sieve tests, where oblong grind particles outsmart screens and slither through, which gives inaccurate comparisons. What we want to measure of course is surface area. He claims his company, Coffee Laboratory, has developed a better, more accurate way to measure this surface area.

At the expense of getting a little sniffly, there were several awards given to longstanding coffee industry members that deserve mention here. First, Carlo Di Riocco, whose Mr Espresso is the curator of what many of us consider the true Italian espresso. Di Riocco started as an engineer, but combined his insistence on consistency with art. I compel anyone to find a finer drink. He’s also kept doing the right thing against various fads in espresso roast, preparation and serving, a combination that’s kept his product unique.

Oliver Strand was able to do what no other comparable media personality has, and that’s bring coffee to the pages of a big city newspaper, in this case the New York Times. The coffee people I know don’t always agree with him, but that fact is they read everything he writes. So do mainstream readers and that’s what’s most important. If coffee is really the next wine it needs to enter culinary arts columns nationwide. The best part to me is he is real. He really is a coffee enthusiast, not a poseur. I still cringe when I view how coffee has been presented on the Food Network.

Finally, La Minita’s Bill McAlpin was the first person I called after I read a Corby Kummer Atlantic article about coffee. After hearing my own enthusiasm for coffee and wanting to learn and write about it, spent an hour or more discussing it with me, and even introduced me to Ken Stevenson and others so I could get a proper education. I’ve met no more generous person than him in the years I’ve been a coffee scribe. The fact that La Minita defined what is now called a specialty coffee farm is possibly of equal importance. Oh yes, and the coffee is always great! Bill McAlpin was finally properly honored this year. I was surprised to see the outwardly cooler McAlpin get glossy-eyed while receiving his award. Mr Espresso seemed to foster a trend, making these normally staid awards a three-hanky one. Even I wasn’t immune from tearing up a bit seeing these greats get their just acknowledgement.

Finally, we surprised to see OXO, seemingly moments after the Chicago International Housewares Show. Claire Ashley and her team brought their new coffeemakers and accompanying grinder, which features a built-in scale. Lots of folks whispering about it, as I think it shocks them to think a large housewares company (admittedly mostly unpowered) might enter the coffeemaker sweepstakes. I keep telling folks, brewers are the power behind the glory in every great cup of coffee. Great job, SCAA. Another fun and productive trade event.