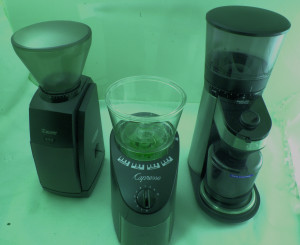 The missing mystery element in brewing is the grinder. There. I said it. Just like every heart doctor wonders if their newly released open-heart patient will exercise, every priest wonders if the just-forgiven sinner will truly repent and change their lifestyle, the coffee roaster must wonder how you’ll grind their beautiful fresh beans before brewing. To accomplish this you must have a good grinder. The word ‘good’ means it can effectively divide the bean into evenly-sized close-to-the-same-shape particles, and be as free as possible of the powdered particles the industry calls “pan”.

I often say that you can make excellent coffee using a simple Melitta manual drip cone, which retails (with a ceramic mug) for around $10. But, a grinder, now that’s a different story. Grinders at the lowest price end simply don’t perform well enough to be a fully functioning member of Team Coffee Brewing. Why is this? Let’s take it away from coffee to explain. If you’re making a stir fry, you know you must strive to consistently cut the vegetables. The reason you want them the same size is the heat will affect them evenly if they are. You’ll get cooked, crunchy vegetables. If they aren’t evenly sized, extremely large pieces won’t cook through and small ones will be overcooked.

In ideal coffee grinding, the pieces will also be the same size. This is necessary because contact time is identical for all those pieces. Larger pieces cause waste; you are not getting all their flavor; too small pieces will be over-extracted and dreaded bitterness occurs. The best grinders are produce grind size uniformity. The worst performing grinders are blade grinders. It is impossible to expect otherwise, as the blade is spinning and the beans are repeatedly and randomly struck. To expect any kind of uniformity is to expect order from chaos. Most readers here are not surprised at anything I’ve so far said, so let’s get going into examining these three grinders. They are all known as entry level, meaning they are lost-cost, but they are from well-regarded manufacturers serving the specialty coffee market.

Capresso Infinity 560 Stainless Steel Conical Burr Grinder $99 The first one is from Capresso. Capresso actually has a long history in this product category. Started in the 1990s by Michael Kramm, an ex-Krups executive and now retired, Capresso went around and scooped up ex-Krups vendors and created some new and innovative products. Some are excellent and others are, in my opinion, okay but nothing special. This grinder was recommended to me by Michael himself, who while no longer working at Capresso, apparently still follows them and thought highly of it. I requested a sample and have been using it quite a while before being able to test it.

NOTE: There are two very similar Capresso grinder products. What differentiates them is the burr material, which does the actual grinding. One is ceramic. The other stainless steel. My industry contacts have told me that stainless is generally acknowledged to grind more consistently at coarser (medium drip through French Press) grinds. I asked for Capresso’s stainless steel grinder. 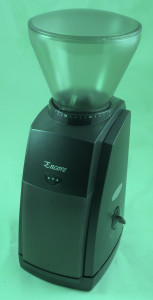 Baratza Encore Conical Burr Grinder $129 The second model is from Baratza. Baratza practically owns the grinder market in the specialty world. Industry regard for their products is high enough that many shops use their costlier grinders, even though they are clearly aimed at consumers. While I’ve always assumed Baratza makes their grinders, I’ve noticed multiple countries of origin credited on their products. Do they really have multiple plants, or are they outsourcing? The model I tested is made in Taiwan, and uses a different burr set from the pricier Virtuoso models. However, Baratza is the leader and I was half expecting it to shame both the others, based upon their company’s reputation.

OXO ON Conical Burr Grinder $199 The final model I tested is from the new kid on the coffee gear block, but one you’ve no doubt heard of in their other categories: OXO makes those soft-handled kitchen gadgets that populate the kitchen hand tools section at Bed, Bath and Beyond. Suffice it to say I was more than a little surprised when I spied OXO at last year’s International Housewares Show brandishing prototypes for both coffee brewers and a grinder! Before these tests I had no impression of OXO’s design or manufacturing prowess. I owned but a single product of theirs; a non-powered can opener. Needless to say I was eager to test their first grinder. 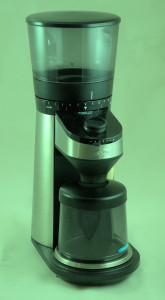 Features compared All three of these grinders are more similar than dissimilar. They all feature simple overhead bins where beans can be stored and twist gauges to adjust fineness. The OXO grinder has one feature that is unique, even when compared to many costlier grinders than the others in this survey; An onboard scale.

Build quality and feel Again all three are similar, in that I could not predict which if any would fall apart or lose its ability to meet specifications by a certain date. If I were to nitpick, I’d suggest the Capresso had a slightly ‘plastic’ feel to it, but I’m not at all sure that another tester would feel the same way. Might be my taste. This is good news because it makes it simple to compare and decide for the right reason: which one grinds coffee the best!

Grind tests I brought all three to Modern Process. Modern Process makes many of the world’s industrial grinders. Name a large roasting plant that packages pre-ground coffee and I bet you they use grinders from this company. I’ve known Dan Ephraim, their CEO since I first wished to write about coffee. He was literally the first industry person I met. We are friends and he and his tester, Rasmy, conducted several tests with each grinder, using beans from Euro Coffee in Los Angeles. Then, each sample was place in a ro-tap device. In case you’re new to testing grinders, this device is a series of screens. The idea is to analyze what percentage of grounds are what size, so we can compare grinders to a theoretically perfect standard and also between each other. The best grinder is going to be one that has the largest majority of grinds that are the ideal size, with smaller percentages of smaller and larger sized ones. We set each grinder for what we all agreed by eye was a drip grind. The best grinder in this test was the Capresso. But, just as significantly, the others were darn close.

Conclusion I could live with any of these three grinders. They are all good choices. I was surprised at how similar, rather than different they performed. Baratza has done a good job with their entry level grinder, but it is not superior to either of the others. The OXO has the very useful scale feature, which will be a deciding factor for some, and helps simplify the measuring process, where many mistakes are made, so it is fairly associated with quality. Capresso leads the pack in both grind quality and price. Considering I’ve owned it the longest and used it quite a bit, it’s already proven its longevity and value. Just a few years ago, coffee enthusiasts would justly complain that there were few grinder options for the less well-heeled. Thanks in part to these three brands, this is no longer the case.