Housewares 2016 – Brewing Better Than Ever! 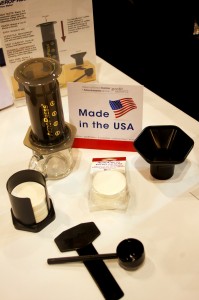 The International Housewares Show is another important trade show for coffee, yet it seems to attract few other coffee journalists. Why? I assume it is because many writers are still stuck thinking coffee is just another beverage ala wine or beer. Those items are brought to their final greatness, then sealed in packages until consumers open and drink them. Period. Coffee is different and a key to its greatness is the final brewing step. At a café, this is someone else’s challenge. At home, where 70% of it is consumed according to the National Coffee Association, the brewing equipment is an obvious dramatic ultimate creator of coffee flavor as it conducts the alchemy which extracts the glorious complex notes from our prized coffee beans. This year’s Housewares show featured a number of important pieces of gear that those of us who know of brewing’s role, will find beneficial to our quest to enjoy the world’s best coffee at home. Here’s my short list:

Behmor’s Joe Behm has single-handedly driven the coffee brewing world to new heights. Before Joe, the brewing world seemed to sit on its collective hind end and got hung up adding alarm clocks other useless features to its products. Joe created the first multiple temperature brewer, the first once since the lengendary Chemex Automatic that had pre-infusion (for fresh-roasted/fresh-ground coffee). Joe’s Behmor brewer was the first I ever tested that acknowledged the fact that anyone living in high-altitude cities wasn’t able to brew at near ideal water temperatures and added an attitude setting. This past year, Joe became the first one to issue a coffee brewer that can be operated by your smart phone. Before you say, “so what?” and wags issue lame jokes about our modern society not being able to press the “on” button, let me quickly explain what this really means. It means being able to control many variables too numerous to accomplish simply by adding buttons. It means taking advantage of the phone’s better interface to those features, which will soon include not only brewing temperatures and pre-infusion times, but things heretofore only available to manual craft brewers, such as rest periods between pours during brewing. 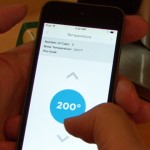 Best of all, and most important in my view, is the connected feature that lets your favorite roasters upload their own personal favorite brewing parameters to the Behmor website. Let’s explore this scenario: Let’s say Jeff Duggan at LA’s Portola roasters decides that his latest Panama Geisha is ideally brewed at a temperature of 197°F. When it’s brewed within its ideal window of fourteen days from roast, it requires a 1 ½ minute pre-infusion of water to settle the grounds before brewing starts; after that it does best with a fifteen second spacing between pours throughout the brew cycle. Then Jeff uploads those parameters to the Behmor web site, aside other similar instructions for various beans. You go there using your phone app, download it and press go. The Brazen Connected brewer just went from being one of the most extensive to use to being one of the simplest. That’s why it’s important.

Bonavita is distributed by Espresso Supply. This is good because Espresso Supply has very close contact with many roasters, some who’ve become for the first time comfortable carrying and endorsing an electric home automatic drip brewer. The public too, has become very comfortable with SCAA industry-certified automatic home brewers thanks to Espresso Supply. They distribute Bonavita gear and make some of their own. They also introduced two reusable K-cups, a plastic one made in the USA and a stainless version not made in USA. I snared a sample and will test it soon. A new Bonavita 5-cup brewer is undergoing my testing right now. 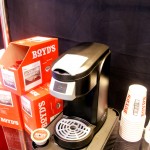 Boyd’s Coffee Company distributes Behmor, and so shared their booth with Joe Behm and with their own TechniBrew International brand. Boyd’s is an unusual coffee company because they are a large wholesaler and coffee brand, especially strong in the Pacific Northwest, but also employ engineers and have a piece in other coffee brewers. One, which I think they own but are branding through the name TechniBrew (they used to be the Technivorm’s US distributor) is a K-cup pod brewer. Before this publication’s fans stop reading, you should know that this one possibly deserves your attention for two reasons. First, although I have not yet officially tested it for review, Boyd’s designed it to fully meet industry brewing standards. I’ve tested one other K-Cup pod brewer that claimed this (made by Bunn) and that unit did prove to me that much of the coffee aficionado’s distaste for this format is due to lackluster brewers that use it, not the format itself. Inventor/Engineer Dave Wheeler of Boyd’s told me the TechniBrew K-cup brewer will meet all SCAA Brewer certification standards. Please note: The SCAA does not review nor certify K-cup brewers. In a casual tasting at their booth, I must say I did find the coffee of a different level than with other K-cup brewers, but of course that is a totally unscientific and anecdotal comment. Boyd’s also designed their K-cup products so they are 100% compostable. From an environmental point of view, this is even more significant.

It’s a little known fact that Brewista is the brainchild of Brian Gross, likely as close as the coffee world has to a Henry Ford. Brian is a genius and inventor. He is co-owner of BonaVita, whose coffee makers are the current everyman’s favorite, but created Brewista as if he became bored with owning just one great company. Brewista even seems to compete with Bonavita on some levels, something I can’t say I understand. Brewista makes the only coffee brewer other than AeroPress which is made in the USA, Cheyenne, Wyoming to be precise. It’s called the Brewista Steeping Filter, and it is a hybrid steep and drip manual pourover. They’ve also got a number of kettles, scales, and other gear. While Brian seems to be aiming Brewista to mostly be lower-cost Bonavita equivalent gear, he revealed an inventive variable spout kettle that allows the user to control flow and thrust. I know of at least one prominent end user who eschews goose-neck kettles for his Chemex pours because he can’t get enough flow and power in order to “push the grounds around” (their words).  Most interesting to me is that Brian is developing different paper filter grades to appeal (I think) to different folks’ tastes on filter. More on that as I learn more from Brian. If you listen to the podcast clip you’ll understand why I can only process a percentage of Brian’s mind while he’s on a roll.

Bunn exhibited a newer, simplified and less expensive single cup Trifecta. They’ve taken their previous two buttons, one controlling time and the other turbidity (using air blown through the brew chamber to stir things up) and made a single button that combines the two. While I despair at losing any functionality of this brilliant and unique machine (both Bunn’s commercial and home marketing teams really blew it in my humble opinion), I think the single button might be justified if it brings the Trifecta into spitting price distance of say a Technivorm, whoops – MoccaMaster. Coleman Garcia brought several new 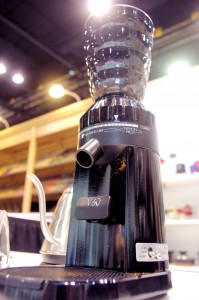 Hario products to IHA. One was actually premiered at CoffeeCon LA in January, well ahead of this trade event. It’s a programmable infrared heater for the Hario Siphon. While their previous product is functional and makes a compelling statement to the already visual home theater experience of making coffee, this new unit offers a touch screen and it’s able to record user information, including the ability to record and repeat your personal siphon brewing method and timings, making it even more beautiful. Suggested retail pricing will be $500. It is awaiting US approvals, but I predict it will be a big seller among this method’s fans. Hario has introduced metal V60s and accompanying matching black, gold and silver aluminum stands. I may be fine with my plastic version, but I also expect these to move into home setups soon. They had their already-well known Mizudashi Immersion cold coffee Brewer there as well. Finally, Hario introduced a home grinder, optimized to accompany and even grind directly into a V60 cone. It also features front panel indicators for Press, V60 and Siphon. While Coleman humbly referred to it as a brand extension, I can imagine a lot of interest as their core audience is sophisticated enough to appreciate a grinder and has a fervent interest in any product labeled Hario, similar to the Apple brand allure. 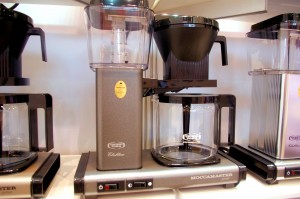 I almost missed them – I keep forgetting that Technivorm is really MoccaMaster. The machines haven’t changed and they likely won’t, and to this brands fans that’s a good thing. MoccaMaster stubbornly refuses to embrace frivolous new features, although some of them in my opinion contribute to taste, but no one can deny they make a great product. They are still hand-built in the Netherlands. They have stuck to all copper heating elements, arguably the best and safest to health. Oh, there is a new color one to add to their array of beautiful ones. A beautiful machine in a geeky way.

While all pod machines presume unproven assertions that pre-ground coffee can be kept fresh in those pods, both Nespresso and Illy pod machines have proven to my taste buds that they are capable extractors of taste, given you like the taste they are engineered to deliver. This year, Nespresso has added the connected feature, meaning you can use and app to program, start and keep track of onboard pod inventory with your smart phone. 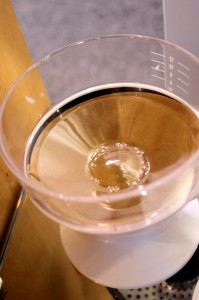 The 12-cup OXO brewer I reviewed recently was getting a lot of attention. Last year OXO brought prototypes and this year they’re all working and their two top brewers earned SCAA certification. To me, the pride of earning this honor with your first machine and one that is able to make 12 cups is noteworthy. OXO’s grinder is also noteworthy because theirs equals a higher priced Baratza grinder (in our grind results tests). One brewer they had that’s spanking new was the OXO Autodrip pourever coffee maker, which makes 6 – 12 ounces of brewed coffee using an innovative cup-marked overhead water reservoir to eliminate guesswork, and which also have a dozen smaller drip holes in order to spread the shower over the grounds. OXO’s Dave Lionetti also told me they’ve played with alternating size and patterned drip holes, which he says enhances the way water falls, agitates and steeps the grounds, which results in a better tasting cup of coffee.

Those are highlights. I reserve the right to add more if I think of them, but those stood out and, once again, Housewares proves to be a great place for coffee brewing products. #Housewares 2016.