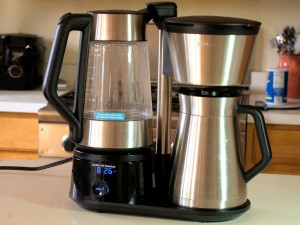 Once upon a time, the way to brew 12 cups of coffee at one sitting was owned by Bunn and its use of always-hot water to make it possible to deliver 200°F (+/-5°) water to a grounds basket and run it through the grounds in an impressive three minute window. A consumer falling-out with the standby mode and a misunderstanding of contact time by consumers, retail appliance buyers and Bunn’s competitors caused these units to be discarded, although if you look through Bunn’s current lineup, there may be a brewer in there that still follows this general principle. But, I’m unnecessarily distracting you from our guest of honor and that’s this new OXO machine, which solves a few of the problems and limitations of earlier big batch consumer brewers, and is at once a leader in this category. Let’s go through its features and then discover how it does in actual kitchen testing and tasting.

How does it all perform?

Tasting tests I’m in a testing phase right now with several (including a second OXO model) other brewers on the bench. I had one coffee in house, the aforementioned Metropolis Honduras from Mario Doreteo Perez. Fortunately, it is a very fine one. Its beautiful fruit and nut notes came through loud and clear with this maker. As I’ve found with most shorter-extraction-time brewers, the bitterness really gets down to the null point. So did even the two degrees below 200°F as a brewing temperature. 198°F just offers a little more fruit, a little less tang. It’s a well-known trade secret that different beans and roasts perform optimally at different temperatures.  The great news is if you can play with this or not; it’s up to you. We used this brewer for several large family gatherings over the holidays and I found it very easy to use and deliver a large batch of delicious coffee. I had to get used to turning it on, as you need to turn the knob to brew so it doesn’t just boil water for its other role, but once you get used to it, it’s really quite intuitive. I was worried that the cupcake filters I found at the supermarket would be undersized, especially given the rather short contact time. Yet, the coffee level, while extremely close, never rose above the line and overflowed inside the basket, a sign of good engineering. Notes: I notice OXO chose a cupcake/flat bottomed filter for this brewer. I have always preferred this filter style. While there are V-shaped filter brewers that meet their specs and brew fine coffee, I think the flat-bottom style does the most to prevent an over-extraction point in the brew basket. It does require 12-cup filters, and ideally you can find these at a restaurant supply house, where they should be, if anything, less expensive per brew than v-style filters from a grocer.

The decision to have the brewer start from cold instead of a constant always-on mode is likely a good one. The fact is it still means only about a twelve minute start-to-finish brewing time and that means it rivals many other twelve cup automatic machines, and many of those never reach the optimum brew temperature, and meanwhile over-extract as they start right away (tepid water and all) and extend the contact time throughout the twelve minute brew cycle. My best brewing results occurred using the full batch recipe of 100 grams medium fine grind coffeee, slightly coarser than I would grind for say a v-shaped filter try automatic drip brewer such as a Technivorm. I realize the OXO uses a shorter duration contact time between water and grounds, and so it is counter-intuitive, but I’m just reporting culinary taste results, not attempting to justify them. Your mileage may vary and I always encourage others to tweak theirs and report back. Conclusion – If this is OXO’s first effort, it is a very good one. Apparently the Specialty Coffee Association agrees with me, as they certified it, not bad for a first effort. haha  Simply, I would put the OXO 12-cup at the top of my list for a twelve cup automatic drip brewer. Highly recommended.