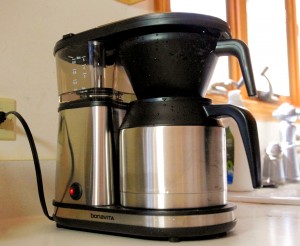 Bonavita practically owns what might have once been called “The Chevy” market. This meant, again at one time, a good quality, well designed product that was easy to use and maintain. It had no stunning features, but was priced for everyman. I suppose in automobiles Chevy has been replaced by Toyota, or recently, Hyundai.

Bonavita hit the marketplace with a Melitta-designed 8 cup coffee maker. It was known as a lower-priced Technivorm but that’s really not the truth. It was a lower-priced Technivorm that increased the water spray width to better match the grounds basket width. Generation 2 Bonavita brewers (no longer designed by Melitta) went further by adding pre-infusion features and switched to flat bottom filters, all in the pursuit of better cup quality. Bonavita gets good marks in the consumer press, including this blog.

Recently, Bonavita brought out this model, which is for the growing medium batch market. Households with two coffee drinkers don’t need eight or ten cups each time they brew. Consumers have realized that fresh is best, and in my home, I brew a couple of cups for each of us each morning. If we are home and wish a repeat dose after lunch or later, we simply repeat the process. It reduces waste too. I pay roughly $20 per pound for specialty beans and, believe me, I cringe whenever I see leftover coffee go down the drain.

The Bonavita 5-cup returns to their Melitta roots with the use of a V-shaped cone filter. They used a number 4 filter, which Bonavita, ever the practical company determined was the easiest to find, plus it gives the coffee plenty of room to expand, which truly fresh coffee does in the first few minutes of brewing. I assume a V-shape was chosen to increase saturation and slow brewing slightly. With an 8-cup brewer, there’s a concern about the brewing happening quickly enough, so that the grounds are not over-extracted. With the smaller batch of a 5-cup, the opposite is true. All drip machines are a carefully thought-out process where grind, volume and time are matched to create the ideal extraction. So, whenever I test a new different-size batch coffee maker, even from a manufacturer of another machine, I spend a fair amount of time playing with the variables I as consumer have over the process.

For instance, I initially tried a grind similar to what the Bonavita 8-cup uses. I found this was the most important thing to tweak. This is not specific to this brewer, but the shorter the contact time, the precise grind needs to be, in my experience. I played with typical cone Melitta-style grinds and finally ended up using a somewhat coarser grind. Not as coarse as Chemex, but definitely coarser than I’d use for most cone filter machines. I also settled on 42 grams of coffee to deliver a cup of coffee I could really enjoy.

The Bonavita 5-cup also has a pre-infusion stage which is easy to implement. You simply hold the on button in place for a few seconds. Once it blinks, simply release it and press it on again. Every time you start it the pre-infusion stage will work until you physically unplug it. This stage is important to anyone who uses coffee two weeks from roast, which is how I do it and I assume you do too. It’s technically known as “fresh coffee”. Of course I’m also assuming we’re all fresh grinding it seconds before we brew.

How does it test? I measured the temperature right at the hot water exit holes. It is slightly lower in temperature than I expected. It peaks at near 200°F, 199°F to be exact. The first minute was spent climbing “to altitude”. While not seeming ideal, it probably matches many slow brew methods in practice. Most people who use a Chemex may not measure their brewer’s temperature, but sub-200°F temperatures are quite common in practice. It doesn’t really bother me, but it did bother the SCAA, who held to their exact temperature specs their certification program demands.

A non-certification test, but one I consider critical and a hallmark of every other Bonavita brewer I’ve yet tested is the water dispersion, which is truly excellent with this machine. Dispersion is geek-speak to describe what happens when a skilled barista constantly surveys the grounds in your Chemex and makes sure the water covers the grounds, ensuring there are no dry spots and that all the grounds receive equal saturation. In practical terms this means you get strong flavor that is less bitter, than it is if you concentrate the water too much on one particular spot.

The contact time between the hot water and the grounds is slightly under 5 minutes. This is at the short end of the SCAA brewing specification of 4-6 minutes for drip. Again, I could get all sniffly about it, but I found that it was not a problem. If I were to guess I’d say the aforementioned water saturation is so efficient it accomplishes the right amount of extraction in less time.

A note about temperatures: I think the range of 196° to 205°F called for in the SCAA standards (themselves adaptation of the original Pan American Coffee guidelines developed many years ago) are reasonable. I agree we need to start somewhere, but there’s also a big difference between a brewer that misses the mark by a degree or two, while still meeting other criteria versus ones that don’t seem to even try, frankly, most of the ones out there made by the largest small appliance makers. 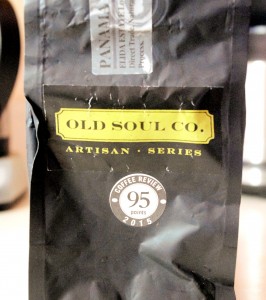 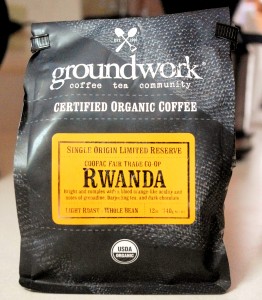 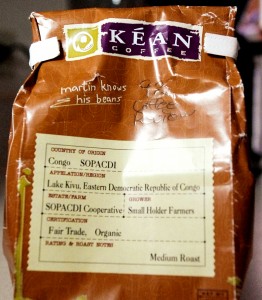 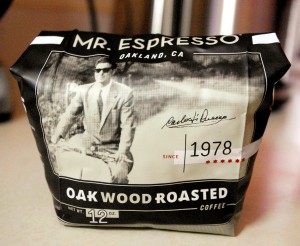 Test 1 – I made a batch using Groundwork Coffee’s Organic Rwanda, they’d been kind enough to share with me at CoffeeCon LA. I already enjoyed it in my Bonavita BV1900S, but I made it improperly in this first outing. Although the coffee had the same notes, everything was out of balance, and auspicious beginning. I realized I’d used 44 grams (still not sure why) and a medium coarse grind as I would in an 8-cup flat bottom brewer. I’m only reporting it because I can’t say enough about how important it is to use the right recipe.

Test 2 – Next, I was able to snare Old Soul Coffee’s Panama Elida Estate Lot #13, which was rated 95 by Ken Davids in The Coffee Review. What a fruit bomb! Fortunately I backed off the recipe to just about 42 grams. What a difference! I strongly recommend this coffee to anyone who’s convinced that the recent Panama Geisha invasion is only attributed to the Geisha bean. While I’m a fan of Geishas, this coffee proves a Panama coffee can be stellar and not be Geisha. This one isn’t a Geisha, but it’s delicious.

Test 3 – Kean Coffee’s Congo Lake Kivu is a rarity for me. I’ve never before had a Congo coffee. I guess I’ve been missing a lot. This coffee, selected and roasted by Martin Diedrich, is not only a wonderful bean, but Martin is not afraid to roast it just a shade darker. It suits this brewer perfectly. I had trouble trying anything else after I’d tasted this.

Test 4 – Finally, I received a Sumatra Mandheling from Mr.  Espresso in Oakland. John DiRiuocco uses a wood fired roaster. I know nothing professionally about roasting, but I do know how heat is applied makes a difference. That and a honey roasted Sumatra made for an interesting sample. I’d brewed tests of this coffee (and compared them to an Oren’s Daily Roast Mandheling I also had in stock) and discovered I preferred it brewed near the 195°F mark, so it was a good fit for this brewer. I used 42 grams medium finely (#12 grind on my Baratza Encore grinder). I felt I’d finally arrived at the perfect intersection of coffee bean, recipe and grind setting, the holy trinity of good automatic drip brewing.

Previous review note: I make it a policy never to read other reviews while mine is in progress. I had seen this one however and I noticed CNET’s reviewer (Brian Bennett) noted a bitter taste. I’m not sure what the difference was, but I was unable to produce a bitter coffee during any testing of this machine, which was over a one month test period. Two test results I tested and reported that could cause bitterness, temperature and contact time, are both at the low end in this machine, so that are unlikely (ne impossible) to produce this result. Other factors could be his choice of beans, which he did not identify. I only test using lighter (Third Wave style) high end specialty beans, in this case two of our samples were brewed using beans rated in the mid 90s in the Coffee Review. No bitterness whatsoever. I’m unaware of other factors that would result in bitterness. Maybe he needs to check his water supply. If Mr Bennett wants to contact me, reveals his bean choices and discuss other possible causes, I’d be happy to share them. I’m befuddled by his claim. In any case I didn’t find cause to be concerned and I suggest it’s unlikely under your conditions.

Conclusion: I’m getting spoiled lately. Between my manual drip methods, and some ultra-sophisticated automatic drip brewers which feature multiple brewing temperatures, which is one reason I was able to simply match up a coffee to this one’s brewing temperature range. However, those machines are larger and costlier, both in base price and coffee to keep it going (think gas mileage). The Bonavita 5-cup makes four/five delicious cups of java. Consider that the smaller the batch size and brewing time, the more precise you must be in measuring your coffee grounds and grind. That said, I could easily live with this brewer. If you want a trouble-free, easy to use, no frills but high quality brewer to make fresh specialty coffee for you and a friend, the Bonavita BV1500S five cup is a good choice.