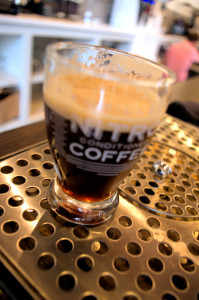 “Have a cold one!” How often do we receive this invitation? I have consumed around two or three beers in my entire lifetime. But, I’d have my eyes closed if I didn’t realize how popular beer has become, and how much it matches coffee’s complexity. My first taste of nitro beer was at last year’s Chicago CoffeeCon. Ipsento Coffee served samples. Although I had lots of coffee including other cold brews, this one had the foamy richness of a beer. It surprised me how creamy it was as well as how refreshing it tasted, all with no cream or added sweetener.

A month later and Fox Business asked me to appear on a Chew on This segment featuring an on-air tasting. Watching that afterwards I realized my mistake. Nitro coffee’s originator Mike McKim, of Cuvee Coffee scolded me. “Should’ve shaken the can more” he critiqued. I admit we were both pensive about shaking a carbonated can on-air, although it would have made the segment livelier – no doubt.

Flashback to Chicago. Tim Taylor and I finally got to meet. I brought along my audio gear to record Tim’s telling of his own nitro product, the same one I’d tasted on tap at CoffeeCon.

Here’s that interview for you now.