Can you really make automatic coffee that tastes as good as the best manual hand-brewed? Let’s just say it is possible. To illustrate this claim, I chose the Bonavita BV 01002 to demonstrate the possibility.  It meets the stringent Specialty Coffee Association (SCA) standards. Most automatic drip brewers do not.  It is simple to use and pretty un-tweaky as well. Frankly, other than having to measure grounds and grind the coffee separately, it’s as easy to use as a K-cup brewer. It works great as is. But, I have found some nips and tucks to my procedures that lift it to match my best manual brew results and I thought I’d share them.

I’m sure you’re already aware that I’m a big fan of this brewer. So is George Howell who uses it to accompany his tasting seminars at our CoffeeCon events. But, if someone were to ask exactly how I make coffee with this automatic drip machine it would be as follows:

Grind – If you’ve been with me for awhile, you know I advocate erring a notch coarser when using most brewers. But I also advise playing around with grind and, once in a while, it pays to just experiment a notch at a time. For instance, with this brewer I go one notch finer. That may be because I don’t usually make a full 8-cup batch, but rather fill the water only to the 1 liter mark. Just so you understand the testing procedure for SCA certification,  brewers must make their coffee, start to finish, within six minutes. So when you make approximately 25% less, it’s likely that it will be a little rushed traveling through the grounds. I’ve found by grinding slightly finer I slow the drip rate and this increases brew strength. If I make a full batch I coarsen the grind slightly.

Recipe Measurements – Consider that we may have gone from using too few grounds to using too many. Maybe this brewer does such an efficient job it does not need the requisite 55 grams specified for a liter of coffee. If you make one liter, I suggest you try using 50-51 grams. I found this to be the best recipe. I discovered this by accident as I only had 50 grams left of a particularly memorable ReAnimator coffee when a friend arrived for a visit and a cup. Since I needed to make one liter, I decided to chance it. To my surprise I preferred it using this formula.

Pre-infusion – This brewer has a pre-infusion stage, which drips a few ounces of water over the grounds to saturate them before the majority of water is released and dripped over the grounds. I strongly recommend using it if your coffee is fresh, meaning just a week or two from its roast date. If your grounds are older than this, or you use pre-ground coffee, you may skip this stage, although it won’t hurt, so if in doubt, use it. Its purpose is to allow the coffee to de-gas, which prevents foaming up and potentially spilling over the filter holder’s top edge. Pre-infusion also allows it to de-gas and settle down before the majority of water drips through, which actually helps facilitate the extraction process. 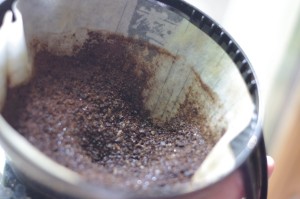 Filter holder – If there’s one area where manual drip still reigns supreme it is the end user’s manual water dispersion over the grounds and subsequent even extraction.  Fortunately, the Bonavita already does a good job dispersing the water. But, for a perfectionist end-user, we are able to occasionally swivel the filter holder to vary the showerhead’s position over the grounds. This is kind of tweaky, but shows to what extent I’ve played with mine over the years. I would not expect this tweak to make a night and day difference with this maker, but it is a slight tweak and just goes to ensure that all the grounds get wet. If someone told me this is too far to go to make coffee, I’d likely agree. But, I do it. Look at my “after” photo of the grounds post-brewing and see if yours matches. Again, if it’s too much, skip this if you like. 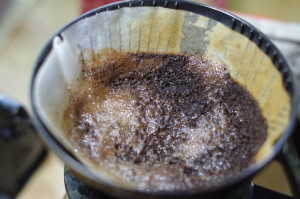 I define tweaks as anything I do beyond the instruction manual, that appears to make a better pot of coffee. This brewer is noteworthy in that none are necessary for it to perform its stuff. But, I’m comparing to the best manually brewed coffee I’ve ever had. That fact that it’s that close to perfection already is impressive. I simply believe I can match that perfect flavor with this brewer, with just a little attention to details.

What are your tweaks?