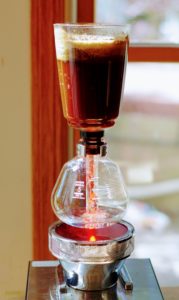 Hario syphon in flight. A beauty isn’t she?

I’ve waited forever to do this review. Why? I don’t know. Words fail me when discussing syphons, which used to be called vacuum makers, glass makers or sometimes percolators. You likely think I mean the dreaded pumping percolator, which became shortened to the single word designation, but I don’t. The two used to be distinguished from each other, but as the vacuum version got phased out, the pumping percolator got called a percolator. Since then, it’s been blamed for virtually taking the coffee industry down, but that’s another story… and blog post! 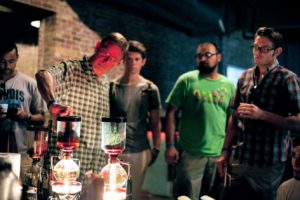 CoffeeCon Syphon class taught by long-time pal Charlie Sarin (thought not pictured). The Syphon is open-ended tech, with different presenters offering their individualized hacks and variations on the theme.

The Hario Syphon is one of two relatively popular and widely available syphon brewers. The other is made by Bodum and deserves its own review. Let’s take the Hario syphon and examine its strengths, and any potential weaknesses. It’s really not hard to understand a syphon. The lower bowl is really a kettle, where the water is heated in order to make coffee. The two bowls are fitted together. Once the water is heated to nearly a boil, hot air in the lower bowl expands, forcing the near-boiling water up through the upper bowl’s tube, through a filter where it starts bubbling as if it’s boiling – it’s not. At this point the barista (at home, you or me) adds finely ground coffee to the upper bowl and stirs it swiftly so it starts the extraction process. After roughly a minute, the siphon is removed from heat and the brewed coffee travels downward, as cooling air in the bowl below creates a vacuum (hence the original name) and drawing the coffee through the filter, where the spent grounds are trapped. When the coffee liquid is all down below, the two bowls are carefully detached (they’re hot!) and the lower bowl simply becomes a serving vessel.

At this point, lots of question should come to mind. For this reason, I’m inserting an FAQ here.

How Did We Test the Hario? 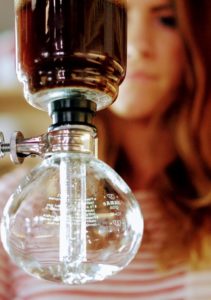 Note bubbling, boiling water in lower bowl during upper bowl brewing. This boiling water has no effect on brewing process, nor is it cause for concern that all the water never attends the extraction process. The syphon brewer is an excellent method.

I tested the Hario using it precisely as I described above. However, there are a few options for you to choose. The filter for instance. Hario supplies both a metal permanent filter and a cloth filter. As a long time syphon fan, to me there is no choice. I prefer cloth as the definitive filter of choice with this method. Metal is fine, but it does let some particulate through and into the final cup. While hardly objectionable and certainly never to the point of being described as sludge, I simply prefer the viscosity and taste of coffee filtered by cloth. To me it offers the ultimate coffee mouthfeel. While cloth filters are not permanent, they do last a month or more if carefully rinsed and stored. They take no more care than the metal permanent filter and they are renewable and inexpensive. I misplaced the one that came with the brewer and didn’t have the nerve to request more from Hario. I went online and purchased some from Amazon for around $5 shipped Prime. About a year’s supply for me. I can’t complain. 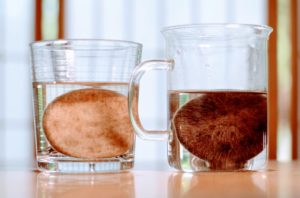 On the left is a fresh cloth filter, after its first use. Right is a two-week-old filter. Notice discoloration begins immediately and darkens with each use, regardless of scrubbing. Works fine regardless. I suggest not worrying about discoloration which seems to have little effect on cup taste.

Don’t be a Purist. The benefits of pre-heating water

One thing I recommend. Don’t pour cold water directly into the syphon for heating. Boil it in a separate kettle. It saves time and energy. I just used a nearby BonaVita kettle but any one will do. I set it to 203°, my normal drip set temperature and used its gooseneck to carefully pour the near-boiling water into the lower syphon bowl. Then I placed the syphon bowl on a heat source. I guess I qualify as a barista because Hario supplied me with an infrared beam heater. I do not know if these heaters are available to the public, but if they are, I highly suggest one if you are committed to syphon long-term. They are simply so easy to use. They also illuminate the process beautifully. Admit it. Part of the syphon’s allure is its theatrical visual as it does its stuff. The beam heater captures all this in its glory. 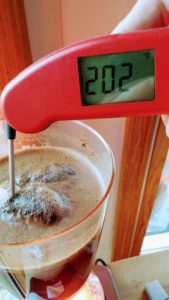 Looks like it’s boiling, but it’s not. The upper bowl, where extraction takes place, is typically within a few degrees of 200F. Many consider this ideal contact temperature.

A check online of beam heaters tells me it’s at this writing a $250 option.  Meanwhile a flame lamp is easy and inexpensive at around $30. Frankly, some baristas tell me they think it’s the ideal way to brew with the syphon. More responsive and direct heat using the flame. If you preheat it, it takes very little time. If you don’t, the beam heater is still too slow.  Visually, the lamp gives very little to the beam heater. Both make great coffee. Your call.

Is the Syphon Hard to Use?

The Syphon is not hard to use. It does take some effort and attention, but it’s not hard. The method is actually very reliable and, assuming you agree with the industry’s standards, the syphon follows them perfectly. As I said, it was the model for those standards.

Here are a few potential cons to syphon brewing. 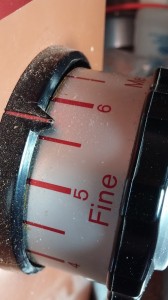 Do you need a syphon? Of course not. The question is akin to asking, “Do I really need an iPad? There’s virtually nothing you can do on an iPad  you can’t accomplish on a laptop or other mobile device. The point is it’s ideal for some situations and uses. Same with a Syphon. I know of no better, more thorough and reliable extractor of coffee oils than the Syphon. It never needs to be de-limed with citric acid. Its filtration contains little or no plastic that can become smelly with time and use. The syphon is the best method of extracting from all the grounds. No matter how thoroughly you use drip, most drip cone designs contain some “trouble zones” where grounds in those areas are likely to be less extracted. The syphon’s natural bubbling acts as an extraction facilitator, using what Bunn Corporation calls “turbulence” throughout the contact time. The very dry spent grounds observed after the finished coffee beverage has been drawn down below is evidence of the effectiveness of the final separation of brew from grounds of the syphon.

I can’t imagine being a coffee enthusiast without owning a syphon. And, Hario makes one of the best; perhaps the best.